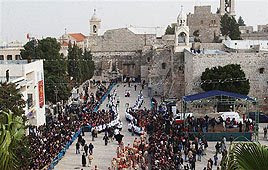 After already having been deployed in the West Bank cities of Hebron, Jenin and Nablus, Palestinian police are expected to assume security responsibilities in the Bethlehem area by December 25, but the overall responsibilities will remain Israel's, Defense Minister Ehud Barak confirmed during a security meeting at his office over the weekend. The Israeli security establishment is pleased with the success of the Palestinian police's deployment in the West Bank. The officers, who were trained in Jordan, successfully secured two business conferences that were recently held in Bethlehem and Nablus.


The Palestinian officers designated for Bethlehem will apparently be allocated from the forces currently patrolling the outskirts of Hebron. The two special Palestinian police battalions currently number 900 officers.


Talks between the Palestinian Authority and the IDF's Coordination and Liaison Administration on the deployment of the officers in Bethlehem are expected to continue over the next few days.


'Israel will consider expanding their authority'

Israeli defense officials noted this would be another goodwill gesture towards the Palestinian Authority and its president, Fatah leader Mahmoud Abbas. As the Palestinian elections, currently scheduled for January 9th, draw closer, many in Israel fear that Hamas will seize control of the West Bank as it did in Gaza.


Israel, in cooperation with Jordan and the European Union, are investing great efforts in expediting the deployment of Palestinian troops in the region while building up the PA's institutions in an effort to bolster support for Abbas within the Palestinian population.


In stationing forces in Bethlehem the defense minister is responding to an outright request made by the PA. Barak maintains constant contact with Palestinian Prime Minister Salam Fayyad on the issues of troop deployment, economic initiatives and the border with Israel. He has so far responded positively to several Palestinian security initiatives.


Bethlehem is preparing for a much larger Christmas season than previous years. Since early 2008 nearly a million tourists have visited the city, almost twice the number recorded last year. Estimates are that many more will take part in the festivities this year. The tourism boom serves a shared Israeli-Palestinian interest – strengthening the Palestinian economy and strengthening Abbas' men.


"If the Palestinian forces are proven successful in Bethlehem as well, Israel will consider expanding their authority to additional cities," said defense officials.