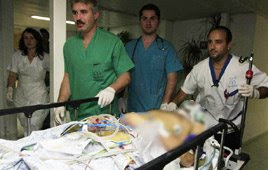 Eight Israel Defense Forces soldiers were wounded Friday evening by mortar shells fired from the Gaza Strip at an IDF base near Kibbutz Nahal Oz in southern Israel. Two of the troops were seriously injured, one of them suffering from shrapnel in the head. The other six soldiers sustained light to serious wounds and were evacuated to the Soroka Medical Center in Beersheba and the Barzilai Medical Center in Ashkelon.


Two of the shells fired landed within the base, one hitting the officers' quarters and the other hitting the female soldiers' quarters. Two other mortars landed in open areas in the Sha'ar Hanegev Regional Council.


Shells also landed in the Netiv Haasara area, where there were no reports of injuries or damage.


"I immediately called on all kibbutz members on the loudspeaker to enter the fortified areas. We then searched for fallen shells, but luckily for us they didn't fall in the kibbutz but rather in the nearby base. The army told us to stay near the bomb shelters."

Sela said the past few days have seen a rise in the number of mortar shells fired at the area. "Luckily, almost every house in the kibbutz has a protected space," he added.


The injured troops' relatives who arrived at the hospitals said that the soldiers' stationed at the Nahal Oz base have gotten used to the mortar fire in the area.

"This time it was closer, and someone she knows was hurt," said a relative of one of the soldiers.


Not the first time

About a year ago, a Qassam rocket hit the Zikim military base, near Ashkelon, wounding 67 soldiers. Four troops were seriously injured in the attack. The rocket landed next to a tent containing several soldiers from a battalion in basic training.

Earlier Friday, four Palestinians were injured in an IDF attack east of the southern Gaza town of Khan Younis. Palestinian sources had initially reported that at least one Palestinian gunman had been killed, but later revealed that he had returned to his home unharmed.

During the exchanges of fire Palestinians fired six mortar shells, which landed within the Strip.

One Qassam rocket was fired from the Gaza Strip on Thursday evening, landing within a kibbutz in the Eshkol Regional Council. There were no reports of injuries, but one house sustained light damage.

Gilad, who is currently heading Israel's indirect negotiations with the Palestinian groups in the Hamas-controlled territory, further told Egyptian Intelligence Chief Omar Suleiman that was prepared to extend the truce beyond December 19 end-date.

Gilad's monthly visit was defined by the Defense Ministry as "routine", but officials said it would have been called off had Israel not been interested in resuming the ceasefire.

Efrat Weiss and Ali Waked and Reuters contributed to this report
Posted by GS Don Morris, Ph.D./Chana Givon at 9:35 AM