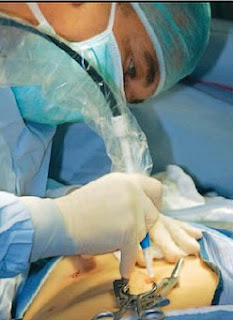 Surgeons of the future may have to learn welding rather than sewing, now that a team of applied physicists at Tel Aviv University have developed an efficient and safe way to close incisions in the skin that they say could also be used on cuts inside the body.

The team was led by Prof. Abraham Katzir, who found a way to maintain laser heat at the correct temperature so that the incision is sealed to minimize the risk of infection and scars and speed healing. Katzir says the development is "a groundbreaking medical technology" and could also be used quickly and easily by medics on the battlefield and at road accidents, as well as by plastic surgeons and other surgical specialists.

Katzir is the son of the late Prof. Aharon Katzir, the world-famous biophysicist who was murdered in the 1972 Japanese Red Army terror attack at Lod Airport; he is the nephew of Israel's fourth president, 92-year-old Prof. Ephraim Katzir.

The Health Ministry, which studied the technology carefully, gave permission for the first clinical trials in 10 gall-bladder surgery patients a few months ago.

The test procedures were performed by Dr. Doron Kopelman, head of the general surgery department of Emek Medical Center in Afula, and Dr. David Simhon, who was a partner in the TAU research.

The results on patients were judged recently and found to be very successful, with comparisons made between the parts of the incisions closed by sutures and the parts using welding.

Now the team will see how the welding technique works on longer incisions, such as those in cesarean sections or inguinal hernias.

"The technique of sewing the human body with needle and thread is an old one that has existed for thousand of years," Katzir noted.

"Modern medicine has advanced in many fields. Now the time has come to upgrade one of the most common and important procedures in surgery - sealing the two sides of an incision.

"Suturing often requires much skill, creates scars and always opens the possibility of infection through the wound, because sutures are not watertight. Using more advanced techniques such as pins or speedy glues can often create large and ugly scars that remain on the body for years and cause much distress. Our new technique is meant to solve these problems."

Back in the 1970s, surgeons used a laser to try to fuse together the two flaps of skin, but it caused burns that disrupted the skin's ability to heal and even encouraged scarring.

But Katzir and his team use another technique called "laser welding" in which biological glue - a special albumin protein produced by the Israeli biotechnology company Omrix - is smeared on the two sides of the incision.

Then a laser warms it at the correct temperature to make the glue thicken and create a hard "shell" that protects the wound and allows it to heal speedily without allowing pathogens to enter.

They used a temperature-controlled carbon dioxide laser and special silver halide optical fibers that they developed. The technology prevents overheating and burns.

The breakthrough has aroused world interest and is presented on the Web site of the Massachusetts Institute of Technology (www.technologyreview.com/biomedicine/21687).

The TAU team will soon apply to the US Food and Drug Administration for authorization to carry out larger clinical trials of the procedure. If they are as successful as the operations so far, the technology could be turned into a commercial product in a few years.
This article can also be read at http://www.jpost.com /servlet/Satellite?cid=1226404836338&pagename=JPost%2FJPArticle%2FShowFull
Posted by GS Don Morris, Ph.D./Chana Givon at 4:07 PM