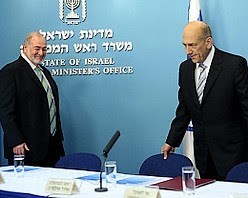 Seventy-two percent of Israelis rate corruption in Israel as high or very high, according to the Corruption Index for 2008 annual poll, published Monday.

The poll was released ahead of the Sderot Conference, which will take place Tuesday and Wednesday at the city's Sapir College and will examine social, educational, economic, political and security issues in society. The survey found a 10%-20% growth in public perception of corruption. Participants ranked stealing the public's money for private use, receiving money or benefits illegally, and appointing unskilled employees or relatives to public positions, as the most corrupt acts.

Appointing relatives to public positions for which they are not qualified was also denounced by 92% of participants as most corrupt, while 91% decried receiving money or benefits in exchange for promoting personal issues.

Only 1% of Israelis rated governmental corruption as low or very low.

The survey was carried out by Maagar Mochot Research Institute in November among 543 Israelis over the age of 18, in Hebrew, Arabic and Russian.
This article can also be read at http://www.jpost.com /servlet/Satellite?cid=1226404824719&pagename=JPost%2FJPArticle%2FShowFull
Posted by GS Don Morris, Ph.D./Chana Givon at 2:18 PM