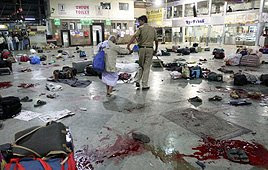 Terror attack in Mumbai continues: At least 101 people were killed and 287 were injured in a terror attack on 10 different sites across the Indian city of Mumbai. Terrorists have taken over the Chabad offices and appear to be holding an Israeli family hostage by terrorists, local police reported. Gunshots have been heard from the house.

Indian news network IBN aired photos from Nariman House, where Chabad offices are located, showing the house surrounded by security forces. The network reported of exchanges of fire heard in the area but did not report on the condition of the people inside the building.

Meanwhile, Chabad's website reported that the organization's emissary to India, Rabbi Rabbi Gavriel Holtzberg, and his wife Rivka, were missing. According to the report, one of Holtzberg's friends received an email from the rabbi at around 11:30 pm (local time). Israeli Consulate was in touch with Holtzberg, but the line was cut in middle of the conversation.

Menachem Cohen, editor of the Chabad On Line (COL) website, told Ynet that "Gabby Holtzberg and his wife Rivka were sent to India several years ago by the Education Center, which sends Chabad emissaries across the world."


The Chabad organization is working with the Foreign Ministry and American Consulate, as well as with a local team of volunteers, in a bid to locate the Holtzberg family and other Jews staying in Mumbai.

Foreign Ministry representative Lior Chayat told Ynet, "We are aware of the reports on what is happening in Nariman House, but we have no official confirmation. We are in contact with the local forces, with the army and police commanders there.

"The Indians are treating this event as one with hostages, but we have no information on what is happening inside the building."

Hayat added that throughout the night the Foreign Ministry's situation room received calls from 300 Israelis who are looking for their loved ones in India and believe they may be in Mumbai.

The battles between the terrorists and the Indian security forces continued Thursday morning at the Taj Mahal and Oberoi hotels. Exchanges of fire and explosions were heard from inside the Taj Mahal Hotel, part of which went up in flames.

Shortly before 7 am, the CNN network reported that there were no more hostages in the Taj hotel, following reports of 45 foreign nationals being held there.

Explosions were also heard from the Oberoi Hotel. According to different reports, gunmen were holding onto four or five hostages in the hotel.

Battles for the release of hostages were reportedly being held also in a women and children's hospital in southern Mumbai.

So far, dozens of people have reportedly been killed in the combined terror attack, including 12 Indian police officers and Hemant Karkare, the chief of the police anti-terrorist squad in Mumbai. Police said they had shot dead four gunmen and arrested nine suspects.

A little-know group calling itself the Deccan Mujahideen sent an email to news organisations claiming responsibility for the attacks, television channels said.

Witnesses said the attackers were young South Asian men speaking Hindi or Urdu, suggesting that they were probably members of an Indian militant group rather than foreigners.

India has suffered a wave of bomb attacks in recent years. Most have been blamed on Islamist militants, although police have also suspected Hindu extremists of carrying out some bombings.

Reuters contributed to this report

Receive $130 Paid to You Immediately

The LWS Freedom program makes it possible!
Click here to discover how
http://www.lwsfreedom.com/id/greentitan