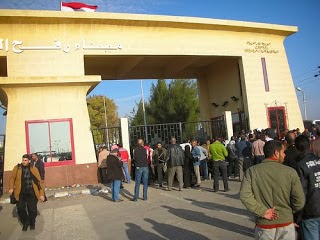 Maher Abu Sabha, Hamas' director of the Rafah crossing into Egypt, said that Egypt promised to open the crossing next week, although it was unclear exactly when or for how many days.

The crossing, the only direct connection between Gazans and the Arab world, has been closed for seven days in a row and has been open only sporadically for months. Even when it is open, only a fraction of the daily passenger traffic allowed under the previous Egyptian regime has been allowed to trickle through in both directions. The average number of travelers allowed to cross in June averaged over 1800 people daily, but in November during the days Rafah was open the number of people allowed across averaged closer to 100 a day - in either direction. This includes patients who need to go to Egypt for medical reasons. This is far less than the number allowed to cross the Erez crossing into Israel.

This is roughly a 95% reduction in the ability of Gazans to travel to Egypt.


Here is a calendar of Rafah's status since the end of October:


If you look at the websites of major human rights organizations and search for "Rafah," however, you will find very little.

Amnesty International last mentioned Rafah in its annual report on Israel in May, before the regime change, and they used it to condemn Israel:

More people were able to travel through the Rafah border crossing with Egypt than during previous years, despite continuing restrictions, but permits for travel to the West Bank remained rare and difficult to obtain, even for patients requiring urgent medical treatment.


It is clearly an issue that Amnesty tracks - and there has been utter silence from them.

Human Rights Watch similarly only briefly mentioned Rafah in their annual report on Israel in January, saying that Egypt was improving in that area. Since the coup - not a word.

Notice also that when Egypt improves something, it is worth mentioning; when things get worse, it isn't. Which is the exact opposite of the case with Israel, which over the past couple of years has done numerous things to help ordinary Gazans - working with farmers to help them export crops, increasing exports of goods from Gaza, spending money to improve the Kerem Shalom crossing, and more. None of that is mentioned.

Oxfam is the only major human rights NGO that has mentioned Rafah, very briefly, in the last paragraph or its report on Gaza a year after Cast Lead:


The agency also called on the Government of Egypt to ensure that official crossings at Rafah are open for Palestinian people and goods.

It does not elaborate on how Egypt has effectively closed Rafah during the year.

From reading the material on these sites, no one would have any idea that Egypt has turned Gaza into a prison - the wording routinely used to describe Israel's actions in Gaza. The situation is clearly familiar to these organizations and they are deliberately ignoring it, while writing dozens of reports condemning Israel. Its reveals that the human rights of Gazans takes a back seat to condemning Israel, in the eyes of these NGOs.
Posted by GS Don Morris, Ph.D./Chana Givon at 4:39 PM