Hamas Interior Minister: "We shall be coming with a third Intifada" and will establish "Islamic Caliphate" 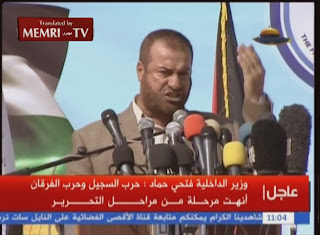 "As far as I am concerned, there is no difference between our policies and those of Hamas." -- Mahmoud Abbas, March 15, 2013
"Of course, Israel cannot be expected to negotiate with anyone who is dedicated to its destruction. But while I know you have had differences with the Palestinian Authority, I believe that you do have a true partner in President Abbas..." -- Barack Obama, March 21, 2013
"Hamas Interior Minister Calls for Third Intifada and Declares: We Will Establish Islamic Caliphate," from MEMRI, n.d.: