Nakba II: 50% as Many Palestinians Forced to Leave Syria as Israel 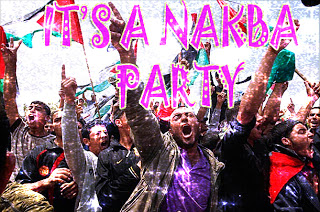 The majority of Arabs who left Israel during the War of Independence did so because they were trying to avoid being in the middle of a conflict. Since then they received a fake national identity as Palestinians and their own UN administered welfare state that keeps them as permanent refugees in order to perpetuate a political conflict with Israel.
The so-called Nakba that was supposedly a formative event for them just got rewound in Syria.


UNRWA’s statistics show that in Syria there are some 235,000 “Palestinian refugees” who have become displaced in that country.
Over 71,000 of the “refugees” became real refugees in Lebanon, and 8000 more in Jordan. Thousands more have fled to Egypt, Gaza, Malaysia, Thailand and Indonesia.
44,000 homes of Palestinian Arabs in Syria have been damaged or destroyed.
In total, more than half of Syria’s Palestinians have been displaced.
Palestinian Arabs in Syria are still being killed daily. A UNRWA employee was killed last week, becoming the 7th UNRWA employee killed in Syria. The total number killed is above 1500.


This kind of thing isn’t unprecedented. The Middle East is actually full of refugees from various wars and conflicts. Some of those refugees originally came to Israel in the last 200 years and then became known as “Palestinians”.
And it’s been going on ever since. In 1991, Kuwait expelled 200,000 Palestinians after they collaborated with Saddam. And the world said nothing.
Not much attention is being to the expulsion of a population 50 percent the size as the one that supposedly generated the Nakba from Syria.
Because this isn’t about the “Palestinians”. It never was. It’s about destroying Israel.
Article printed from FrontPage Magazine: http://frontpagemag.com
URL to article: http://frontpagemag.com/2013/dgreenfield/nakba-ii-50-as-many-palestinians-forced-to-leave-syria-as-israel/