How Netanyahu averted coalition crisis at start of talks


By keeping negotiations discreet, the prime minister enables Bayit Yehudi to stay in the coalition for an extended period of time, even as Israel's chief negotiator Livni makes serious concessions on Netanyahu's behalf. 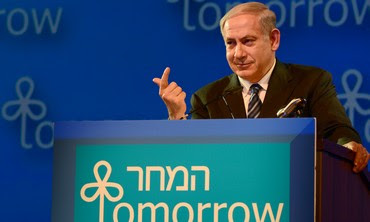 Prime Minister Netanyahu at the President's Conference in Jerusalem, June 20, 2013. Photo: GPO
Prime Minister Binyamin Netanyahu succeeded in preventing his governing coalition from unraveling over the weekend following the announcement of forthcoming negotiations with the Palestinian Authority.

Netanyahu kept Bayit Yehudi leader Naftali Bennett satisfied by receiving a commitment from the Americans that they would not say the talks would be based on pre-1967 borders.

That enabled Bennett to claim victory, despite Netanyahu agreeing to release dozens of terrorists from prison.

Receiving a commitment that the talks will be held discretely could keep Bayit Yehudi in the coalition for an extended period of time, even as Israel’s chief negotiator, Justice Minister Tzipi Livni, makes serious concessions at Netanyahu’s behest.
“As long as we are not giving up our territorial assets, we are staying in the coalition,” said Bayit Yehudi faction head Ayelet Shaked.
Science, Technology and Space Minister Yaakov Peri (Yesh Atid), who is the cabinet’s most dovish minister, hinted that if Bayit Yehudi left the government, Labor could come instead.
“If God forbid there be a crisis in the coalition, there is a majority for the peace process in the Knesset and there will be a government that can continue it,” Peri said.
But Labor leader Shelly Yacimovich said her party would only join if a peace agreement had been reached with the Palestinians and the Right leaves the government in protest.
“We would not want to be the reason peace is not reached,” Yacimovich said.
At a meeting with President Shimon Peres, Yacimovich pledged to defend Netanyahu from the extreme Right in the Likud and the coalition. She stressed that it was important to remember that the goal is not the process itself but reaching an agreement.
Transportation Minister Israel Katz (Likud Beytenu) questioned the ability of Palestinian Authority chairman Mahmoud Abbas to lead negotiations toward a peace agreement with Israel, saying that “he had less control over Palestinians than Syrian [President Bashar] Assad has control over Syria” at the moment.
“Just as nobody would seriously consider giving Assad land in his current situation, it is impossible to seriously think about transferring the control of territories to the Palestinians,” Katz said prior to entering the weekly cabinet meeting.
The terror victims association Almagor intends to protest against releasing murderers in several ways. It cosponsored an Internet ad campaign with Arabs praising Netanyahu.
Families of terror victims intend to come to a special meeting of the Knesset Interior Committee on Monday.
Later in the week, they are to pitch a tent outside Netanyahu’s official residence in Jerusalem, near where the Schalit family protested for the freedom of their kidnapped soldier son Gilad.