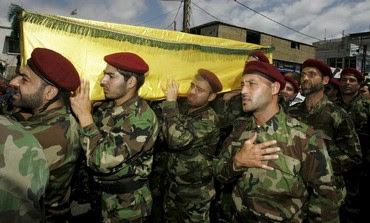 Hezbollah members at funeral of a Hezbollah fighter, May 26, 2013 Photo: REUTERS/Mostafa Assaf
Hezbollah’s large-scale involvement in Syria is eroding its military resources, though the extent of the damage it is incurring remains a closely guarded secret.
The Lebanese terrorist organization’s Shi’ite fighters, who were deployed to Syria to fight on behalf of Syrian President Bashar Assad at Iran’s orders, tipped the balance in favor of Assad at the battle of Qusair in recent weeks. But Israeli security analysts said on Sunday the victory came at a heavy price for Hezbollah that is set to rise the longer the organization remains engaged in Syria.
Additionally, as Sunni- Shi’ite sectarian tensions spread to neighboring Lebanon, Hezbollah could find itself dealing with unrest on its home turf too.
Any benefits Hezbollah is gaining from its Syrian intervention, in the form of battlefield experience gained by its fighters, is being outweighed by the high price of the involvement, according to Yoram Schweitzer, the director of the Terrorism and Low Intensity Warfare Project at the Institute for National Security in Tel Aviv.
“For Nasrallah, there is some good news from his involvement in Syria. Hezbollah is gaining battle experience. But this is smaller in significance than the price Nasrallah is paying, politically and operationally,” Schweitzer said.

“There is an erosion of Hezbollah’s fighting forces and its resources. The organization is suffering a loss of personnel. And of course, politically, this is increasingly chipping away at Hezbollah’s image as the resistance party that fights the common enemy [Israel],” he added.
“Hezbollah is entangled. It is seen as a foreign army and a sectarian religious entity operating against the will of the majority in Syria.”
It is likely that Hezbollah sent some of its quality units based in south Lebanon, originally designated for combat with the IDF, to the battlefields of Syria, Schweitzer said. “They’re suffering casualties as they fight irregular bands of rebels.”

In Syria, Hezbollah is struggling to deal with the same tactics it itself employed in the past against the IDF. A report in The Lebanese Daily Star published last month quoted one Hezbollah fighter as saying that the tactics of the jihadi Jabhat Al-Nusra Front in Syria had “a kind of irritating familiarity.”
“Hezbollah has gone from being a terrorist militia to a military in every way,” Schweitzer said. “They have the weapons and training from Iran and Syria, and [high] combat quality. Now, it’s fighting against disorganized rebels who are inferior in their scope of operations and quality of personnel, but nevertheless, Hezbollah is facing erosion. It’s encountering difficulties.”
With Sunni Salafi jihadis becoming one of Hezbollah’s foremost enemies in Syria, it is likely that the Salafis will seek to assist their counterparts in Lebanon to fight Hezbollah, the security expert said, although he stressed that Hezbollah is far better equipped than any of its Lebanese rivals.
Dr. Mordechai Kedar, a Middle East expert at Bar-Ilan University’s Begin-Sadat Center for Strategic Studies, said Hezbollah’s full casualty count remains “a big secret.”
“They’re not talking about it. Every report about this is suspiciously one-sided,” Kedar, who served for 25 years in IDF Military Intelligence, told The Jerusalem Post.
“The rebels wish to exaggerate Hezbollah’s casualty count, and Hezbollah seeks to lower it. We don’t have the real numbers,” he added.
Kedar estimated that the number of dead and injured Hezbollah fighters is “in the hundreds,” adding that Syrian rebels were also snatching weapons from killed Hezbollah fighters.
“I can’t say how this precisely affects their operational capabilities. This kind of intelligence is only available to the military,” Kedar said. “But they are losing legitimacy, even among their own Shi’ite sect.”
“If the Syrian regime survives, Hezbollah will come out very big. They’ll earn a lot, because the regime will owe them its survival. If the regime falls, Hezbollah will fall with it,” he said.
Addressing Sunday’s intense battles in Sidon, the scene of explosive tensions between a Lebanese Salafi militia and pro-Hezbollah elements, Kedar said. “Sidon is a majority Sunni city. Hezbollah is more based in the villages and mountains.”