Maxim Fahima, father of a survivor, recounts ordeal after attack, says he hopes ‘something will change.’ 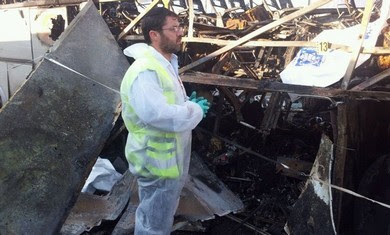 ZAKA man examines damage in Burgas Photo: Avigdor Shatran
While many politicians responded on Monday to the news of the EU declaring Hezbollah’s military wing a terrorist organization, few can relate like Maxim Fahima, whose son Daniel was left permanently scarred after a bomb ripped through a tourist bus in Burgas, Bulgaria on July 18, 2012. The attack killed five Israelis and their Bulgarian bus driver.
Daniel’s story is at once a “miracle from heaven, God wanted him to return and recover,” she said, though he is not the person he once was.

His father says there is some amount of “a good feeling” that maybe, because of what happened to Daniel, “something will change” – like Hezbollah’s operations being hampered by the EU decision.
Maxim Fahima described the first moments of when he learned of the bombing, saying he saw the reports of the incident on television and then received a hysterical telephone call from his wife. He said they “felt something had destroyed our world,” and tried calling his nephew, a travel agent who had arranged the trip.
“There was no answer, I knew there was something wrong,” Fahima said. “If he was not answering, he was avoiding me.”
A frantic search began as Fahima called his brother to try and get in touch with his nephew. He said he was getting little to no answers from authorities, as he checked Facebook for updates and kept trying to call Daniel.
“No one answered on the other side,” he said.
At 2:00 a.m. the Foreign Ministry announced on television that it knew the names of who had been killed and injured.
Since Fahima had heard nothing from his son, he said they “knew a disaster had hit them.” At 2:30 a.m., authorities told them that Daniel had been injured and flown from Burgas to Sofia. Officials urged Fahima and his family to go meet their son in the hospital. With his wife and daughter, the family immediately went to the airport and flew to Sofia on their own – a trip that took them 14 hours.
The next day, in the middle of the afternoon, the Israeli Embassy in Bulgaria updated them on Daniel’s status. Hearing that their son was alive and well, Maxim Fahima said “this strengthened us since we know he’s strong, and would not give up to let something break him.”
But a short time later, and before they got to see Daniel, the embassy told them their son was being raced back to Sheba Medical Center in Tel Hashomer for emergency treatment and they should also return.
Fahima said “they would not let us on the same plane with him because they did not want us to distract the doctors. His life was in danger and he had a 10 percent chance to live.”
On different flights but flying at virtually the same time, Daniel and his family returned to Israel.
The family was finally able to see him in the hospital and discovered that he had almost no legs and large parts of his body were damaged.
“Everyone fell on the ground,” Maxim Fahima said.
Daniel would lay in a coma for two months before waking up, and when he did, his ability to ever live independently was virtually destroyed. Large portions of his legs were gone, he had lost one eye and he had suffered permanent brain damage.
Today, Daniel can walk 50 to 100 meters and has retained many cognitive abilities and skills. But his muscles are extremely weak, he has permanently damaged short-term memory and has not gotten over the memories of seeing the bodies of his close friends blown up and strewn all around him.
To exercise his memory, the family tries to get Daniel to write things down that he has done before he forgets them.
Fahima said he wished to thank “the Justice Ministry, the Foreign Ministry and the whole government” for their efforts in convincing the EU to ban Hezbollah.
He said their “persistence” paid off and that “maybe something will come of this,” such as Hezbollah’s movements and operations being interrupted.
Fahima said that he had also tried to help by giving interviews to foreign media and telling the French ambassador in Israel that “today it was a Jew, tomorrow it will be a French person.”
Fahima added that all that he wants is to “live in peace, not always to be living with tension” and that Hezbollah “needed to be stopped at any cost.”