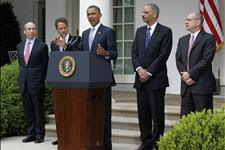 Administration meltdowns are hardly novel. In almost every presidency there comes a moment when sheer chaos takes hold, whether self-induced or as a result of an outside crisis.

Vietnam had effectively destroyed Lyndon Johnson by 1967. Watergate unraveled the Richard Nixon administration, as the disgraced president resigned in the face of certain impeachment. Gerald Ford could not whip inflation and was not re-elected. One-termer Jimmy Carter was undone by the Iranian hostage crisis and skyrocketing oil prices.

For a time, it seemed that Ronald Reagan's second term might not survive the Iran-Contra scandal. George H.W. Bush could not be re-elected after he broke his promise not to raise taxes and Ross Perot entered the 1992 race. The popular Bill Clinton was impeached over the Monica Lewinsky affair and limped out of office tainted. The insurgency in Iraq and the fallout from Hurricane Katrina crashed for good the once-high poll ratings of George W. Bush. The Obama administration over the last month has seemed on the verge of one of these presidential meltdowns.

An open mic caught the president promising Russian President Dmitry Medvedev that he would be more flexible after the election -- as if Obama might grant concessions that would be unpalatable if known to the general public before November. That embarrassment followed an earlier hot-mic put-down of Israeli Prime Minister Benjamin Netanyahu last year.

The president also unwisely attacked the Supreme Court as it deliberated the constitutionality of Obamacare. He needlessly referred to the justices as "unelected" and wrongly claimed that that they had little precedent to overturn laws that dealt with commerce. The gaffe about the court and its history was doubly embarrassing because Obama has often reminded the public that he used to teach constitutional law.

Democrats unwisely went after the Catholic Church and religious conservatives on the grounds that they did not support federal subsidies for contraceptives and abortion-inducing drugs. Another gratuitous scrap soon escalated into an unnecessary fight with Catholic bishops. To widen the controversy further, Vice President Joe Biden and Democratic National Committee Chairwoman Debbie Wasserman Schultz alleged that the contraceptive fight was part of a wider Republican "war on women."

But that new psychodrama also blew up in the administration's face when a zealous Democratic consultant, Hilary Rosen, claimed that Ann Romney, wife of presumptive Republican presidential nominee Mitt Romney, had "never worked a day in her life." In fact, the affable Mrs. Romney had raised five children and had survived both multiple sclerosis and breast cancer.

That silly offensive got worse when, at almost the same time, news leaked that women working at the Obama White House, on average, made 18 percent less than their male counterparts there. Meanwhile, 11 Secret Service agents assigned to the president's trip to Colombia were sent home for soliciting prostitutes -- and then haggling over the cost. Not long before, the General Services Administration was caught wasting hundreds of thousands of dollars on a junket in Las Vegas -- leading to the resignation of the GSA administrator, a political appointee.

Then there was the aftermath of the Trayvon Martin shooting. After Obama's disastrous 2009 commentary about the detention of Harvard professor Henry Louis Gates -- when the president alleged that police acted "stupidly" -- he might have been wise to keep quiet about another explosive racial controversy. Instead, he foolishly plunged in with a puzzling comment that if he had a son, he would have looked like the deceased Trayvon Martin. That editorializing served no purpose except to remind the nation of the racial tensions simmering around the shooting.

The president also went after the rich with the "Buffett Rule," which would ensure that millionaires like his friend Warren Buffett paid at least 30 percent in income taxes. But Obama and his wife Michelle paid just over 20 percent in federal taxes on the $790,000 they earned in 2011. And even if the bill passed, the Obama Treasury would only get new revenue amounting to less than half of 1 percent of what it borrows every year.

The effect of all these unnecessary missteps was to make the Obama administration appear inept -- at precisely the time Republicans were unifying around Romney and ending their long, suicidal primary fights. Some polls even showed Romney suddenly ahead in the presidential race.

So why is the president rashly picking these stupid fights?

Apparently his team wishes to divert attention from generally bleak economic news. The economy still suffers from a dramatic spike in gas prices, chronically high 8 percent plus unemployment, sluggish growth, and serial $1 trillion annual deficits that have sent the debt soaring to $16 trillion.

These perfect storms often either destroy presidents or turn them into unpopular lame ducks. Obama should learn from the fates of his predecessors: There are enough forces in the world to destroy a presidency without needlessly creating more on his own.
Posted by GS Don Morris, Ph.D./Chana Givon at 5:19 PM