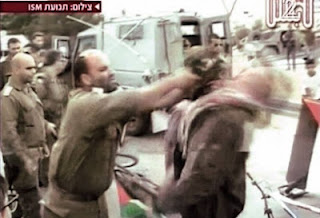 The Israel Defense Forces on Monday suspended a senior officer after a video depicting him assaulting an anti-Israel activist flooded the Israeli and world media. The video showed Lt. Col. Shalom Eisner, the deputy commander of the Jordan Valley brigade, holding his M-16 rifle in both hands and shouting at a group of demonstrators taking part in a bicycle rally in the Palestinian village of Ouja. Several minutes into the video, the officer strikes a Danish protester in the face with his weapon. Eisner said he “acted instinctively” after his fingers were broken earlier in the day by the stick-wielding Danish activist belonging to the International Solidarity Movement.

The protester, Andreas Ias, 20, from Denmark, was treated at a Palestinian hospital for light injuries. He told Channel 10 on Monday that "we were just walking slowly toward the soldiers, we were chanting Palestinian songs calling for the liberation of Palestine. I don't believe that is a provocation."

Mordechai denounced Eisner's behavior, telling Army Radio that it was unacceptable and “does not reflect the IDF’s values.” Mordechai added, however, that the video released by the ISM was edited and did not reflect the whole story.

"These are harsh pictures, but I still can't divorce the filmed episodes from the incident that lasted over an hour and which included violence by the anarchists and Palestinians -- [though] this does not justify what we see," Mordechai said. “We only saw a part of the footage, there were 20 foreign activists shown on the tape, not the 250 Palestinians behind them who tried to block the road. We saw only the blow on the tape, not the two hours of provocations before,” Mordechai said, adding that OC Central Command Maj. Gen. Nitzan Allon had decided to suspend Eisner until the army completes its investigation into the incident.

IDF Chief of General Staff Lt. Gen. Benny Gantz condemned the incident, saying that he saw it with "grave severity."

"The incident does not reflect IDF values," Gantz said. "We will thoroughly investigate this event, and we will handle it with the appropriate severity."

The release of the video coincided with large-scale Israeli efforts on Sunday to suppress a pro-Palestinian fly-in demonstration, in which activists were planning to fly en mass to Israel's airport and protest Israel's policies in the Palestinian territories. Most of the activists were prevented from boarding flights to Israel, and the ones who arrived were effectively contained and removed to holding facilities or deported back to their home countries.

Meanwhile, the Danish activist assaulted by Eisner told Army Radio that he had been assaulted for no reason. "I was just standing there," he said, insisting that he had not attacked the officer or even said a word to him. He said further that the blow had taken him by surprise, causing him to nearly faint.

Eisner, for his part, told his close associates that the activist had assaulted him with a stick, breaking two of his fingers. According to sources, he said further that the video was heavily edited and does not accurately reflect the actual events – which went on for two hours.

Eisner voiced remorse on Sunday, telling his associates that he regretted that "the events happened the way they did." He said that having had time to think it over, he wouldn't have acted the way he did, but "I would have carried out my mission and prevented the protesters from getting through."

He explained that the demonstrators were trying to block the main road, and that his soldiers were the last line of defense preventing them from reaching their destination. "They tried to pass us again and again, though we insisted and explained to them that they are not permitted to enter a military zone."

The senior officer also regretted the fact that his own soldiers had not been equipped with cameras, because if they had been, he said, they would be able to prove that moments before he struck the demonstrator, that same man broke his pinky.

The activist, however, said that he planned to press charges against Eisner, and that he had met with an attorney.

Another activist who participated in the demonstration said Sunday that "we were cycling on the side of the road, near Jericho, and IDF forces came and stopped us, and began assaulting us. We tried, non-violently, to push forward toward Ouja, but the officer who hit the Danish protester with the butt of his gun acted aggressively and violently, and even ordered other soldiers to do the same, telling them 'as far as I'm concerned you can break their bicycles and their faces. They won't get any further.' We were in shock, it was really scary."

But Eisner's acquaintances rushed to defend the deputy commander. They were surprised by the images in the video and insisted that no one should jump to conclusions. Arik Ben Shimon, a soldier Eisner once commanded, told Israel Hayom that "he always enforced restraint, and instructed us to exercise restraint. He is a principled, moral man, a cut above the rest. In this incident he was drawn into a provocation instigated by the demonstrators."

Other associates said that Eisner, the son of the late rabbi Benjamin Eisner who was considered a moderate, had helped a Palestinian woman in the Jordan Valley give birth about a year ago. He had provided a military ambulance to a Palestinian woman, in labor, who didn't have time to travel to a hospital. The baby, who was in distress, underwent life-saving measures in the field by IDF soldiers under Eisner's command. In the Saluki battle in Second Lebanon War in 2006, Eisner extracted troops under fire.