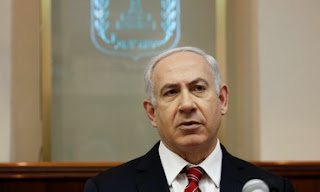 04/21/2012 In interview with German paper, Netanyahu says poem accusing Israel of being main impediment to world peace all the more shocking because it came from Nobel laureate, and not from "some neo-Nazi teenager." BERLIN - Prime Minister Binyamin Netanyahu called German Author Gunter Grass' poem sharply criticizing Israel "an absolute scandal," speaking in an interview slated to be published Sunday in German paper Die Welt am Sonntag. Netanyahu ratcheted up his criticism of the Nobel laureate in the interview with the German paper, as well as defending Interior Minister Eli Yishai's decision to ban Grass from entering Israel. Netanyahu termed the poem “shameful” and a “collapse of moral judgment,” in excerpts of the interview published Saturday on the Die Welt online website. The prime minister's comments highlight that the international row surrounding Grass' perceived anti-Semitic attacks on the Jewish state will not fizzle away in the short-term. The 84-year-old German author, who served as a member of the Nazi Waffen SS as a teenager, published a poem “What must be said” in early April in the left-leaning, Munich-based Süddeutsche Zeitung. Critics in Germany and the United States, as well as Israeli politicians, asserted that the poem demonstrates hate against Jews and Israel. Grass accused Israel of warmongering and planning a first nuclear strike against the Islamic Republic to “extinguish the Iranian people.” He blamed Israel as a main impediment to world peace. In the Die Welt am Sonntag interview, Netanyahu said the fact that "this comes from a German Nobel prize winner and not from some teenager in a neo-Nazi party, makes it still more shocking, “ Netanyahu defended the travel ban against Grass in the interview, saying, "Sometimes there are things that are so shocking that one has to react in other ways. He went too far in the direction of untruth and defamation. Our reaction expressed that.” He continued in the Welt am Sonntag interview that Grass ”created a perfect moral misrepresentation, in that the aggressor becomes a victim and the victim becomes an aggressor. “According to Netanyahu, Israel's efforts to defend itself against extermination become a threat to world peace in Grass' poem. "The firefighter and not the arsonist becomes the true danger," said the prime minister. Netanyahu made comparisons between the defamation of Jews in the Nazi period and the defamation of Israel today through the poetry of Grass. He noted that today the attacks against Israel are comparable to the perfidy and defamation of the attacks launched against Jews during the period of Nazi Germany, which resulted in the Holocaust. “The question which people should pose reads: What if I had back then believed in this perfidy and defamation against Jews? Because defamation is always the precursor to complicity," said Netanyahu. The prime minister added that it was “important and positive” that leading German politicians condemned Grass' statements. He, however, had hoped for more support from the German population. According to some surveys, 70 to 80 percent of responses from Germans on online blogs, newspaper comment sections and television polls showed that Germans nonetheless support Grass’ attacks against Israel. One leading German politician, however, has shown solidarity with Grass. The head of the German Social Democratic party, Sigmar Gabriel, defended Grass last week. Gabriel termed Israel to be an “Apartheid regime” in March and has gone to great lengths to support Grass, who is a longstanding activist in the Social Democratic party.
Posted by GS Don Morris, Ph.D./Chana Givon at 4:53 PM