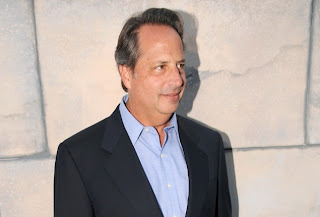 Comedian Jon Lovitz, seen here at a Comedy Central event, helped track down a group of middle school girls who allegedly vandalized his friend’s house.
TakeOur Poll
Do you think the girls should have been charged?
Yes, what they did was awful.
No, being kicked out of school was enough.
I'm not sure.

Jon Lovitz shamed a trio of middle school bullies — with a little help from his Twitter friends.

The comedian took to the micro-blogging site to track down a group of girls who painted swastikas in maple syrup and dumped feces on his friend's doorstep in Northridge, Calif.

"Swastikas in sh— left on my friend's front porch were done by three 14 year old girls, driven to the house by one of the girl's mother," he tweeted to his more than 27,000 followers.

Lovitz tweeted that the girls were targeting his friend's daughter. His friend's parents, he added, were Holocaust survivors.

"These are the 3 popular girls in school who did this ... With the help of a mother," he added.
Some coward & idiot left this on a friend's doorstep, yesterday. This is an insult to all of us . pic.twitter.com/gD5gq4sI
4 Apr 12

Last Thursday, he tweeted out a picture of the alleged culprits.

"The 3 girls who are bullying my friend's daughter. They want to be known. Let them be famous as Jew haters. Pls RT."

On Monday, Lovitz tweeted that the three girls admitted to defacing his friend's walkway. While they will not face criminal charges because there was no permanent damage done to the property, the girl's mother who was involved could face charges for driving the girls to the house in the middle of the night, KCBS2 reported.

He added that they were expelled from school for the prank.

On Wednesday, Lovitz said he was just standing up for what is right.

"My friend is the nicest guy ever," he tweeted. "He was TERRIFIED and sick over his daughter being hurt ... He was PARALYZED with FEAR!!"

He added, "I merely stood up for him. AND all Jews as this is how it starts. I didn't make this an international story. The world did."