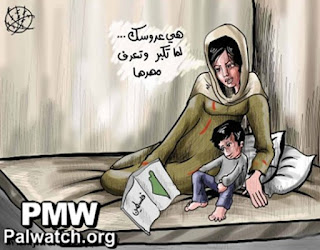 Palestinian parents should teach their children that it is their role or destiny to destroy Israel, according to a cartoon in the official PA daily.

Text in book: "Palestine"
Mother's words: "This is your bride...
When you grow up you will know the dowry."
In the cartoon, a mother is showing her son a book with a map that includes all of Israel and the PA areas. The text in the book defines the map as "Palestine."

The mother tells her son:
"This is your bride... when you grow up you will know the dowry."
[Al-Hayat Al-Jadida,
March 31, 2012 The message of the PA daily is that parents either are educating their children or should be educating their children to see their obligation to replace all of Israel with a state of "Palestine." The dowry - the cost of liberating Palestine - is yet to be learned.

Last week, Palestinian Media Watch reported that the Minister of Social Affairs, Majida Al-Masri, said in a speech that Palestinian unity is needed in order achieve "the liberation of Palestine - all of Palestine," meaning Israel's destruction.

Official PA daily cartoons regularly represent all of Israel as replaced by "Palestine."


In this cartoon, the text reads "the only red line," conveying the message that the goal to have all of Israel eliminated and replaced by "Palestine," remains the real "red line."


Another cartoon expressed the idea that unity between Hamas and Fatah is all that is needed to eliminate Israel. Two identical fighters portraying Fatah and Hamas unity form the shape of the map of Israel and the PA areas. The Palestinian flag is held above the map, symbolizing Palestinian political sovereignty over all of Israel.

Click here to see many more examples of the PA use of maps that portray a world without Israel.
Posted by GS Don Morris, Ph.D./Chana Givon at 4:52 PM