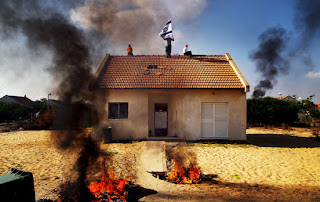 “The Jews are like rats,” Peter Beinart’s grandmother told him when he was a boy. “We leave the sinking ship.” This grandmother — who was born in Egypt and lived in South Africa but dreamed of joining her brother in Israel — believed that Israel was the last refuge of a hounded people, and she made Beinart, who was born in the United States, believe it, too.
But Beinart, a former editor of The New Republic who now runs a blog called Open Zion, has a problem: he finds Israel, morally, a sinking ship. Instead of simply swimming away, he has written “The Crisis of Zionism,” in which he sets out to save the country by labeling many of its leaders racist, denouncing many of its American supporters as ­Holocaust-obsessed enablers and advocating a boycott of people and products from beyond Israel’s 1967 eastern border. While saving Israel, Beinart hopes with evangelical zeal to save America from a handful of Jewish organizations that in his view have not only hijacked American liberalism but also stolen the spine of the president of the United States, who, despite having received 78 percent of the Jewish vote, is powerless to pursue his own agenda.

Like a majority of Israelis, Beinart believes that it is depleting, degrading and dangerous for Israel to oversee the lives of millions of stateless Palestinians, and also like a majority of Israelis, he thinks the solution is the creation of a Palestinian state. But because he minimizes the cataclysmic impact of the second Intifada; describes Israel’s unilateral withdrawal from Gaza not as a gut-wrenching act of desperation but as a cynical ploy to continue the occupation by other means; belittles those who harp on a Hamas charter that calls for the destruction of Israel and the murder of Jews the world over; and plays down the magnitude of the Palestinian demand for a right of return — not to a future Palestine but to Israel itself, which would destroy the Jewish state — he liberates his book from the practicalities of politics.

How you condense a thorny complexity into a short book says a great deal about your relationship to history — and to language. Beinart is especially good at invoking facts as a way of dismissing them. Thus Israel’s offer to withdraw from conquered land in 1967, and the Arab States’ declaration — “No peace with Israel, no recognition of Israel, no negotiations with it” — becomes literally a parenthetical aside in which the Arabs’ “apparent refusal” made Israeli settlement “easier.”

Jews, Beinart insists, are failing what he calls “the test of Jewish power.” He does not mean by this that after millenniums of statelessness, Jews are slow to acknowledge the exigencies of force but something quite the opposite, which allows him to employ several formulations favored by anti-Semites, from the notion of a White House-­crushing Israel lobby, and the observation that “privately, American Jews revel in Jewish power,” to the grotesque idea that “in the 1970s, American Jewish organizations began hoarding the Holocaust.” His statement that occupation “requires racism” indicts Israel as racist (even as Beinart notes elsewhere the libelous United Nations resolution in 1975 declaring that “Zionism is a form of racism”).

In Beinart’s world, anti-Semitism seems little more than a form of Jewish self-deception. The Anti-Defamation League fights “alleged” anti-Semitism against Israel, he tells us. To worry about existential threats to a country the size of New Jersey, with fewer than eight million people living in a suicide-bombing nuclear age, is to surrender to “Jewish victimhood.” Surely it is possible for a country to be both powerful and precarious? Surely “vulnerability” would be a better word than “victimhood”? But Beinart’s feints toward nuance repeatedly give way to stark dualisms: “Liberalism was out, tribalism was in.”

Like the Widow Douglas trying to civilize Huck Finn before he lights out for the occupied territory, Beinart has a missionary impulse toward Israel. His faith resides in “liberal ­ideals,” which he often makes synonymous with Judaism itself, or what Judaism ought to be. Thus we are told that Benjamin Netanyahu doesn’t trust Barack Obama because “Obama reminds Netanyahu of what Netanyahu doesn’t like about Jews,” by which he means a sense of moral obligation. In a neat trick of replacement theology, Obama, referred to as “the Jewish president,” becomes the real Jew on whom election has fallen figuratively as well as ­literally.

Netanyahu, meanwhile, languishes in an old and brutal dispensation, indulging in “the glorification of the ferocious Jews of antiquity.” This Old Testament fury causes Obama to retreat from mentioning the division of Jerusalem: “The response from Netanyahu, the Republicans and the American Jewish organizations would be too ferocious to bear.” What this unbearable ferocity would consist of Beinart does not say. But it must be awful if it can cow the most powerful man in the free world.

This is of a piece with the sins of American Jews, who “rarely talk about what Joseph did to the Egyptians when Pharaoh put him in charge of the nation’s grain.” Turning away from such ugliness, Beinart declares that we need “a new American Jewish story.”

The wish for a new testament is old in Judaism, though some would say that Beinart’s attempt to separate Judaism’s sinful body from its liberal soul — the better to save it — is an antiquated act. Others might say that Israel is itself a new testament, or to borrow Theodor Herzl’s phrase, an old-new testament. Herzl, a hero of Beinart’s, didn’t think Israel would need an army. In 1902, this fantasy was still possible.

Beinart cites approvingly Israel’s declaration of statehood, read aloud by David Ben-Gurion in 1948. It promised “complete equality of social and political rights to all its inhabitants irrespective of religion, race or sex.” Yet Ben-Gurion also decided to eliminate from that document any reference to Israel’s borders, because the Arabs were preparing to attack and he wasn’t fighting to defend rejected borders but to save his state. The written as well as the unwritten words form a kind of text and commentary that Israel still struggles to balance amid all the brute realities of an unforgiving region. Sometimes it does this well and sometimes badly, but the struggle itself is the hallmark of a civilization far beyond Peter Beinart’s Manichaean ­simplicities.

Jonathan Rosen is the editorial director of Nextbook, and the author, most recently, of “The Life of the Skies: Birding at the End of Nature.”