Syrian Request For Russian Missiles a Ploy for US Intervention 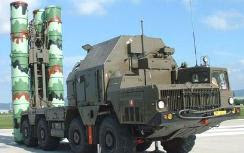 
“Syria was planning to acquire the weapons systems a long time before the negotiations between Israel and Syria were resumed. [The Syrians] have been trying to do so for a very long time as part of their policy, and this is not something new,” said Shalom.
Syria’s announcement last week that it plans to purchase arms from Russia, including long-range missiles and fighter jets, is aimed at getting the United States involved in a new round of Israeli-Syrian peace talks, according to Israeli sources Prior to last Thursday’s talks in Russia between President Dmitry Medvedev and Syrian President Bashar Assad, the latter hinted that he would consider a deal with Moscow to place Russian missiles on Syrian soil as a countermeasure to U.S.-made NATO missiles recently installed in Poland. On the first day of the talks, Russian officials were quoted as saying that the sale of a wide array of advanced weaponry, including long-range missiles and MIG-31 fighter jets, was a key item on the agenda.

In Israel, senior defense officials reacted on Saturday by saying that, to the best of their knowledge, Russia has no plans to sell the arms to Syria. According to the sources, Assad requested Russian weapons in an attempt to pressure the White House to become more involved with the ongoing peace talks between Israel and Syria. Israel recently concluded its fourth round of indirect talks with the hostile Arab regime, in the mediating country Turkey.

Russians Promised No Balance-Changing Weapons Sales
The Israelis said that Russia had promised not to sell any weaponry to Syria that would violate the regional balance of power in the Middle East. That "promise" perhaps referred to a statement by the Russian Foreign Minister, Sergei Lavrov, that his country was considering arms sales to Syria, but that Russia was “indeed prepared to sell only defensive weapons which do not violate the regional balance of power.” The acting Russian ambassador to Israel, Anatoly Yurkov, was also quoted as saying that Russia had no intention of installing the advanced Iskander missile system in Syria.

"The Syrians are making noise about the weapons deals to pressure the U.S. to provide sponsorship for the talks," said one of the Israeli defense sources. He explained that "[t]he Syrians are hoping to use the talks with Israel to gain more credit and strengthen ties with the U.S."

The Iskander: A Considerable Threat
Among the weapons that were claimed to be under discussion, the S-300 surface-to-air (SAM) missiles and the Iskanders worried Israeli officials most.

The export version of the Iskander missiles have a range of 280 kilometers, and if fired from Syria’s border at the Golan Heights, could hit almost every major population center and military target in Israel. Each such missile has the capability to destroy critical civilian infrastructure facilities, such as roads, bridges and large buildings; enemy rocket and missile equipment in the air or on the ground, including missile defense systems; and it can wreak havoc on civilian and military aircraft on the ground. It is classified as a quasi-ballistic missile, a recent innovation allowing for a lower flight trajectory, making it much harder to predict where it will hit.

Israeli MKs: Syria Does Want Those Missiles
MK Silvan Shalom (Likud) told IsraelNationalNews on Sunday that he believes Syria’s attempts at acquiring missiles is genuine, and dismissed the theory that Assad is feigning in order to alarm and pressure the United States to intervene in the Israel-Syria negotiations.

“Syria was planning to acquire the weapons systems a long time before the negotiations between Israel and Syria were resumed. [The Syrians] have been trying to do so for a very long time as part of their policy, and this is not something new,” said Shalom.

“So I cannot accept it…. I cannot really buy it,” said Shalom about the coercion theory. “This is their policy: On the one hand, to support axis of evil countries like Iran in their terrorist activities and to get more missiles.” On the other hand, said the Israeli parliamentarian, the Syrians are striving to “show themselves as willing to move toward a peace treaty with Israel, and [convince the world] they in fact accept it already,” while Israel is still weighing its options.

MK Shalom said earlier that Israel should demand that Moscow refrain from "arming its enemies."

"Arming Syria would lead to a strategic change and could destabilize the Middle East and the world," he noted.

Fellow Likud member MK Yuval Steinitz echoed the doubts of his colleague. “This is over-sophistication,” he said. “You have to take it as it is. Syria is trying to rearm not just itself but the entire Middle East against Israel, and we are now facing the possibility that the axis of evil stretching from Iran through Syria to Lebanon, which is now dominated by Hizbullah, will now gain Russian military assistance.

“I think that Syria is eager to get longer-range missiles, both ground-to-ground Iskander missiles, and also long-range anti-aircraft and long-range anti-ship missiles that will enable Syria not only to threaten every military target inside Israel, but also to threaten Israeli airspace and Israeli waters from Syria. And this is of course the real threat.”
Posted by GS Don Morris, Ph.D./Chana Givon at 6:27 PM