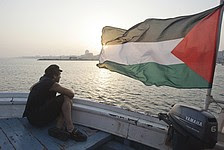 Two boats full of international activists that were allowed to sail into Gaza's harbor on Saturday may be detained by the navy on Thursday as they set sail back to Cyprus, this time with 14 Palestinians on board. On Wednesday, the Free Gaza Movement held a press conference in Gaza City to announce the departure of the SS Free Gaza and SS Liberty early Thursday morning. In addition to the 40 foreign activists, organizers said, the boats would also be carrying some 14 Palestinians who had previously been denied the right to exit Gaza by Israel.

The organizers said that among the Palestinians were students with valid foreign visas or dual citizenships who had been accepted to universities abroad. Additionally, a Palestinian professor will be leaving to return to teach in Europe, and a young woman will be trying to reunite with her husband abroad.

Despite the concerns of the IDF, Prime Minister Ehud Olmert and Defense Minister Ehud Barak decided last Saturday to allow the two boats to reach Gaza. The decision was made after officials concluded that if the navy clashed with the boats, Israel would be playing into hands of the trip's organizers, who were seeking to create a provocation.

Government officials in Jerusalem and the Defense Ministry said they were closely monitoring the situation and by Wednesday evening they had yet to publicize their decision. It was possible that the navy would interdict the boats and at the least inspect the passengers to ensure that none of them posed a security threat to Israel.

Dr. Vaggelis Pissias, one of the organizers of the Free Gaza Movement, rejected Israel's right to stop the boats.

"We do not accept that Israel can stop these boats," Pissias said. "Palestinians have the same rights as all other peoples. Why is it that the only people in the Mediterranean without access to their own waters are the Palestinians?"

Meanwhile, Barak decided to reopen the crossings into Gaza on Thursday after they had been closed two days earlier in response to Kassam rocket fire on the western Negev.

Jeff Halper, the Israeli participant in the Gaza Free Movement boat voyage, was released on bail on Wednesday, a day after being arrested in Sderot for illegally entering Gaza.

Halper paid NIS 2,000 bail and was presented with a 30-day restraining order keeping him away from the Erez crossing and the Gaza Strip.

"On Monday, the Palestinian government gave me Palestinian citizenship - including a passport. On Tuesday, I'm already in an Israeli jail," Halper told The Jerusalem Post.

Halper said his goal was to create "civil diplomacy" between the Palestinian and Israeli peoples, adding that he was helping Palestinians draft a letter of friendship to the people of Sderot. "We [Israelis] know about Kassam rockets on Sderot but we never relate to the fact that Gaza has been under siege," he said.

Yaakov Lappin contributed to this report/i>.
This article can also be read at http://www.jpost.com /servlet/Satellite?cid=1219572145081&pagename=JPost%2FJPArticle%2FShowFull
Posted by GS Don Morris, Ph.D./Chana Givon at 7:53 AM