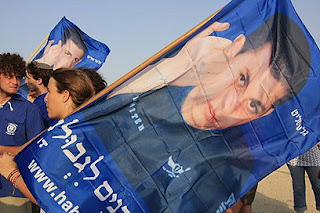 Some 150 people gathered just outside the Gaza Strip on Wednesday evening to mark the 22nd birthday of kidnapped soldier Gilad Shalit. It will be his third birthday spent in Hamas captivity. The event took place at the Suffa border crossing, where Palestinian gunmen abducted Shalit to Gaza on June 2006.

Speaking to reporters ahead of the event, Miki Goldwasser slammed the government's inaction towards securing Shalit's release. After the body of her abducted son, Ehud Goldwasser, was repatriated by Hizbullah, Goldwasser has vowed to continue fighting for Shalit.

"I'm here because three families started this journey, and my mission is not over yet. It will end only when Gilad Shalit is returned, this is a shared struggle. I think of the case of (MIA navigator) Ron Arad and I'm terrified to think that Gilad could share his fate."

Goldwasser accused the government of being preoccupied with internal politics rather than focusing on Shalit.

"I don't think Hamas is so strong that nothing can be done. I don't know the reason, it could be that they are too busy with other things, like the primaries, instead of what should be the first order of business," said Goldwasser.

In her speech the bereaved mother called on Palestinian mothers to join the struggle to see their children freed for Shalit. "Just as you do not want your sons to celebrate the upcoming Ramadan away from home, so we too do not want to see the coming holiday celebrated with Gilad in captivity," she said.

Shalit's platoon commander, Dagan Shochar, said that politicians fear for their standing and therefore are scared to make tough decisions. "We can't allow leaders to abandon a soldier, because by doing so they are abandoning all of us. A soldier who knows that the country will not fight for him, won't fight for her. But we will serve, at all times and under all conditions, despite the moral collapse led by the leaders of Israel," he said.


Minister Ami Ayalon was also in attendance at the rally. Israel must be willing to free prisoners with blood on their hands to secure Shalit's release, he said.

Ayalon added that he understands doing so would be hard on bereaved families and acknowledged that the freed prisoners could pose a future threat, but said the government must do everything in its power to bring Shalit home.

Shalit's family plans to mark his birthday on Thursday in their home in Mitzpe Hila. A group of protestors is also planning to stage a demonstration in Tel Aviv for Shalit.
Posted by GS Don Morris, Ph.D./Chana Givon at 7:46 AM