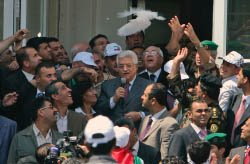 RAMALLAH, Occupied West Bank: Israel freed 198 Palestinian prisoners on Monday in a gesture to President Mahmoud Abbas as US Secretary of State Condoleezza Rice arrived in the region to spur US-backed peace talks. The prisoners were welcomed by thousands of cheering supporters at an outdoor celebration at Abbas' headquarters in the Occupied West Bank political capital of Ramallah.

"The release of this group fills us with joy, but we will not be satisfied until all prisoners are released, the 11,000 who are still waiting," Abbas told the crowd, referring to Palestinians still in Israeli jails.

"There will be no peace without the release of all our prisoners," he added.

The release took place just hours before Rice arrived on her 18th visit in two years aimed at encouraging peace talks formally relaunched at a conference hosted by US President George W. Bush in November.

"This is a day of joy for the fighters of freedom and independence," said Said al-Attaba, 56, the longest-serving Palestinian prisoner as he had been behind bars since 1977 for killing an Israeli woman.

"It is like a wedding celebration for the Palestinian people, but our joy will not be complete until all Palestinian prisoners are released," he said.

Those released also included Mohammad Ibrahim Abu Ali, known as "Abu Ali Yatta," who was jailed in 1979 for killing an Israeli settler who was studying at a religious school in the Occupied West Bank town of Hebron.

A member of Abbas' Fatah party, he was elected to Parliament in 2006 while behind bars.

The releases of Attaba and Abu Ali were rare and controversial exceptions to Israel's policy of not freeing those who have been implicated in deadly attacks against its citizens.

"This is a big day we have been awaiting for 32 years," said Attaba's sister Sanaa, who along with friends and family has been preparing a hero's welcome feast for her brother in his hometown of Nablus.

Israeli Prime Minister Ehud Olmert proposed the release earlier this month, saying that it would bolster the Western-backed Abbas, whom he has met on a roughly fortnightly basis since the peace talks were formally relaunched.

"We hope it will contribute to a positive climate," Olmert's spokesman Mark Regev said. "It is not easy to release prisoners, and particularly those who have been involved in murderous terrorist attacks."

Last month Israel carried out a prisoner exchange with Lebanon's Hizbullah, in which Israel traded five Lebanese prisoners and the remains of nearly 200 Lebanese and Palestinian fighters for the bodies of two soldiers.

The fate of the two Israeli soldiers, whose abduction in a deadly cross-border raid had sparked Israel's 2006 war on Lebanon, was not known until they were brought to the border in two black coffins.

Israel has been indirectly negotiating a similar deal with Hamas, which rules the Gaza Strip, in a bid to recover Gilad Shalit, an Israeli corporal seized in a deadly raid launched from Gaza in June 2006.

The latest release is seen as a boost to Rice's efforts to push the two sides toward their stated goal of reaching a full peace agreement by early 2009 despite a lack of tangible progress.

Abbas once again vowed that he would not accept a partial agreement that did not fully resolve the decades-old conflict.

"All the issues, including the fate of [Occupied] Jerusalem, the refugees, the settlements and the borders should be resolved. We will not accept any other accord," he said.
Posted by GS Don Morris, Ph.D./Chana Givon at 7:09 AM