Huckabee: 'There is Only One Place for a Jewish Homeland' 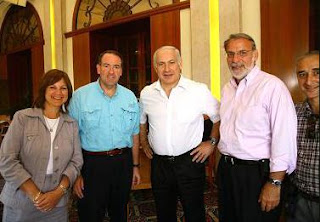 Former Arkansas Governor and vice-presidential hopeful Mike Huckabee flew in to Israel Monday on a whirlwind two-day fact-finding and solidarity tour. On his first day in the Holy Land, Huckabee visited Jewish neighborhoods in Jerusalem, while on Tuesday he is scheduled to tour Sderot. Daniel Luria, executive director of the Jerusalem Reclamation Project (Ateret Kohanim) took Governor Huckabee around Jerusalem, including a traditional stop at the Western Wall. However, Huckabee was also afforded the opportunity to view parts of Jerusalem which no major American politician has had the privilege of seeing. These included new Jewish enclaves at Abu Tor, the Yemenite Village in the Shiloach (Silwan Valley), Kidmat Zion, the Muslim Quarter in the Old City of Jerusalem, and the grand new housing project at the Mount of Olives.

While touring Governor Huckabee also had time to make statements and respond to questions from journalists.

Gov. Huckabee said he understood the need for a Palestinian state, but that it should not interfere with the Jewish one.

He emphasized that the international community agreed to recognize clear, definitive boundaries of a Jewish homeland in Israel as early as 1919.

"We have a moral obligation to the Jewish people to honor the commitment that has been made through decades and decades of understanding that there is going to be a homeland for the Jewish people," he said.

"To say that Jews can't live in Jerusalem is the equivalent of telling the Boston Red Sox they can't play in Fenway Park. Obviously, that would never go over very well on Beacon Hill."

"In terms of the deepest roots and attachment to the land of Israel, Mike Huckabee really wins out," Dr. Frager said. "He is more than happy to learn firsthand what actually is going on, which is all I ask any political figure to do in America."

"I wish that Jewish leaders would speak so clearly, so unequivocally," he said. "Here's a guy who says, 'Yes, I'm for a Palestinian state,' and then says, 'but in Saudi Arabia.'"

At the tail end of the Jerusalem tour Gov. Huckabee toured Zedekiah's Cave, that is, King Solomon's ancient quarry and probable site of King Zedekiah's escape route from a besieged Jerusalem in the tail end of the First Temple period. Here, underneath the Old City of Jerusalem, the governor was met by a re-enactor playing the part of a sullen Jeremiah who has witnessed the destruction of his beloved city. However, Jeremiah recounts that though the destruction has occurred, God has promised to return the Jews yet again and that the sounds of joy will be heard in Jerusalem: