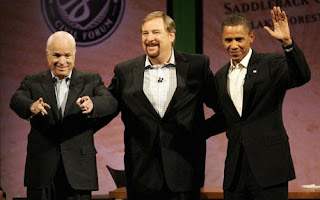 His confession came as he met his presidential rival Senator John McCain on the campaign trail for the first time, when they shook hands and hugged each other during an event at an evangelical church in California called designed to examine their religious credentials. Endeavouring to woo evangelical Christians, a crucial voting bloc that was instrumental in electing George W Bush twice, the two men cast aside the hostilities that have marked their contest in recent weeks.

Mr Obama appeared at ease and peppered his responses to questions with references to the Bible. He sought to atone for youthful indiscretions, saying he had been guilty of "fundamental selfishness" at times, notably in his experimention with drugs in his youth.

"Americans' greatest moral failure in my lifetime has been that we still don't abide by that basic precept in Matthew that whatever you do for the least of my brothers, you do for me," he added.

But his support of abortion, a non-negotiable issue for many conservative Christians, remains a considerable obstacle, and he drew disapproving noises from the 2,800 audience at the Saddleback mega-church in Lake Forest, when he gave an evasive response to the question of when human rights begin following conception.

"Whether you are looking at it from a theological perspective or a scientific perspective, answering that question with specificity, you know, is above my pay grade," said Mr Obama.

Mr McCain, who has always been against abortion, in contrast gave a swift response: "At the moment of conception". He won a loud round of applause.

The Democrat recovered somewhat when he said that though he supported gay civil unions, marriage was a "sacred union" between a man and a woman.

Their encounter on stage on Saturday night will be possibly the only one before they meet for the first of three nationally televised debates on September 26.

As a regular church-goer comfortable talking about his faith, Mr Obama is ostensibly better placed than most recent Democratic candidates to win over evangelicals. A recent Pew Centre poll showed 25 per cent favouring Mr Obama, a similar number to those supporting Democrat John Kerry at the same stage of the 2004 campaign.

However Mr McCain is not popular with evangelicals, many of whom see him as insufficiently committed to their agenda. This time Pew found that 11 per cent of evangelicals are undecided, which could make a crucial difference on polling day.

The forum came ahead of the closing phase of the marathon presidential race, with both candidates expected to soon name their vice presidential running mates, ahead of their party conventions, the Democrats on August 25-28 in Denver, Colorado, and the Republicans on September 1-4 in Minneapolis-Saint Paul, Minnesota.