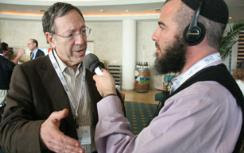 Canadian Member of Parliament Irwin Cotler, a Liberal party representative, has stated that the Palestinian Authority, including its Chairman and Fatah leader Mahmoud Abbas, is guilty of purveying hatred of Jews. He also lamented that the official PA incitement is being ignored by Western governments and media outlets MP Cotler said that Hamas, with their charter's "genocidal objective, anti-Semitic ideology and terrorist instrumentality," is not alone in its incitement in the PA public sphere. "I'm talking about the Palestinian Authority," said the Mount-Royal MP at a press conference this week. He added that the "culture of incitement" harms not only Israel, the PA Arabs themselves.

Cotler recently returned from a fact-finding mission to Israel, where he also met with PA officials and told them that "hate breeds hate. If you have a culture of incitement and hate, you're going to create a culture of hate that is pervasive in the Palestinian society itself."

Cotler cited several examples of anti-Jewish incitement in the PA. Among the most egregious offenses, he noted, were those promoted by official PA government outlets and officials, as well as by Arab academics.

"People don't realize that Abbas signed a law, on the very day there was a suicide terrorist attack in December 2005 against Israel, providing monthly stipends for the families of suicide bombers. In January 2007, Abbas addressed a large crowd that was estimated as being over 100,000, in which he said 'the sons of Israel are mentioned in the Koran as those who are corrupting humanity on Earth.'"

According to the Canadian MP, "Abbas has never recognized Israel's legitimacy as a Jewish state." The official PA media, meanwhile promotes anti-Israeli libels and "breeds hatred and contempt for Jews."

The PA leader's anti-Israel statements and the hatred promoted by his official outlets, Cotler charged, has been judiciously ignored by the West and those involved in promoting Middle East peace. Yet, that incitement, Cotler concluded, is "the greatest threat to a just and lasting peace."

He is also a well-known advocate for the rights of Jews expelled from Arab and Muslim countries in the years following Israel's establishment.

Earlier this month, Cotler said that he was working on a draft legal indictment of Iranian leader Mahmoud Ahmadinejad, which he'd like to present to the United Nations on September 22 of this year. He would like to see Canada, the United States, the U.K., Australia, France and Israel, among others, work together to bring Ahmadinejad to an international court for Iran's domestic human rights abuses, support of international terrorism, and incitement to genocide against Israel.
Posted by GS Don Morris, Ph.D./Chana Givon at 4:07 PM