The Case Against Obama - In His Own Words 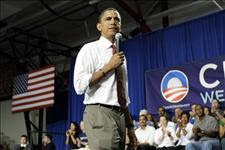 It would be hard to make a better case against a Barack Obama presidency than the one Obama has made in his own words. The most memorable thing about Obama’s speeches is not generally what he says, but rather how large and enthusiastic the audiences are. If voters pay attention only to the symbolism and get caught up in the excitement of the Obamessiah and his throngs of fainting disciples, he stands a good chance of winning in November. If voters pay attention instead to the things Obama is saying, the case against an Obama presidency will be clear. Obama’s youthful appearance is often cited as one of his biggest assets, but when he opens his mouth he doesn’t always come off as presidential or even particularly intelligent. The political figure who perhaps has received the most ridicule in the past twenty years is Dan Quayle (due largely to a misspelled word on a flashcard he read during an appearance at a school). I wonder how much more grief would have been heaped on Vice President Quayle if he had made any of the following gaffes committed by Barack Obama (from Michelle Malkin):

· Last May, he claimed that Kansas tornadoes killed a whopping 10,000 people: “In case you missed it, this week, there was a tragedy in Kansas. Ten thousand people died — an entire town destroyed.” The actual death toll: 12.

· Last March, on the anniversary of the Bloody Sunday march in Selma, Alabama, he claimed his parents united as a direct result of the civil rights movement: “There was something stirring across the country because of what happened in Selma, Alabama, because some folks are willing to march across a bridge. So they got together and Barack Obama Jr. was born.” Obama was born in 1961. The Selma march took place in 1965.

Some of Obama’s gaffes go beyond simple slips of the tongue and confusion over numbers though and display a lack of knowledge on important issues as was the case when he commented on the war in Afghanistan and the lack of translators: “We only have a certain number of them and if they are all in Iraq, then it’s harder for us to use them in Afghanistan.” As Malkin pointed out, the real reason it’s “harder for us to use them” in Afghanistan is because Iraqis speak Arabic or Kurdish, while Afghanis speak Pashto, Farsi, or other non-Arabic languages. Worse than the lack of knowledge of the languages spoken in other nations is that he lacks an understanding of the threat posed by some of them. Or maybe he doesn’t. It is really a bit confusing. In Portland, Oregon, Obama said of Iran, “They don't pose a serious threat to us.” The following day in Billings, Montana he said: “I’ve made it clear for years that the threat from Iran is grave.” Maybe it depends what the definitions of “grave” and “serious” are. As I said, it is all bit confusing. Maybe that is why so many focus on the crowds at Obama’s events, rather than to what Obama is actually saying to them.

If voters are paying attention to what Barack Obama says they will see not only a lack of knowledge of important issues, but on some of the issues where he is informed, an attempt to hide his true position and past votes.

In the Saddleback Church forum last week, in response to Rev. Rick Warren’s question, “At what point does a baby get human rights in your view?” Obama responded: “Well, uh, you know, I think that whether you're looking at it from a theological perspective or, uh, a scientific perspective, uh, answering that question with specificity, uh, you know, is, is, uh, above my pay grade.” As blogger Cassy Fiano points out, the idea that someone running for President would dodge such an important question in that way is “beyond ridiculous” and obviously an attempt to be as ambiguous as possible so that he does not offend those who disagree with the very radical positions he has taken on the issue of abortion during his political career. Obama’s past comments and votes on abortion legislation definitely say more about him than anything he is saying on the subject now.

Another example of actions speaking louder than words can be found when we listen to Obama’s money talk. According to Obama’s tax returns from 2000-2006, the Obamas have given far less to charity than John McCain has. In all but the two most recent years reported, the Obamas gave around 1% or less of their income to charity. Their contributions increased in 2005 and 2006 to 4.7% and 6.1% respectively, but still are far short of those of McCain who gave 28.6% in 2006 and 27.3% in 2007. But if you listen to Obama’s words you will hear that he is very concerned about the least among us.

According to the following statement from an Obama speech earlier this summer, it appears pretty much everyone who isn’t Obama is a lesser being: “...I am absolutely certain that generations from now, we will be able to look back and tell our children that this was the moment when we began to provide care for the sick and good jobs to the jobless; this was the moment when the rise of the oceans began to slow and our planet began to heal; this was the moment when we ended a war and secured our nation and restored our image as the last, best hope on earth. This was the moment -- this was the time -- when we came together to remake this great nation so that it may always reflect our very best selves and our highest ideals.” If Obama is able to slow the rise of the oceans then ending poverty and securing peace should be a cakewalk. I suppose he will only be able to accomplish such feats if elected President though.

This week John McCain pulled ahead of Obama in many polls and projections. Maybe voters have finally started listening to what Obama has been saying now that the thrill of his oratory is wearing thin.