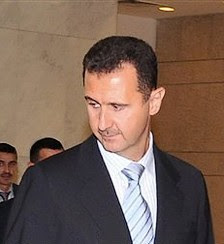 President Bashar Assad of Syria began a trip to Russia this week. Russian news agency RIA Novosti has quoted the Syrian Information Ministry as confirming that the trip will last two days.

According to the statement, the purpose of the trip is to discuss bilateral relations and the latest world and regional developments, particularly relating to the Middle East peace process and to Iraq. Assad's trip to Moscow comes at a particularly opportune time. Russia is in the process of completing what looks like a successful, contemptuous defiance of international will over its actions in Georgia. In the Caucasus, Moscow has thrown down a direct challenge to the US-dominated post Cold-war international order.

Syria, meanwhile, is part of an Iran-led regional bloc which seeks to issue a similar challenge in the Middle East, albeit on a smaller scale. But Assad is not in Moscow purely to compare notes with the Russians. Rather, his trip has a list of clear and practical objectives.

During the Cold War, the USSR was of course Syria's main arms supplier. Following the collapse of the Soviet Union, Damascus was left with an outstanding debt of $13.4 billion to Moscow for weapons purchased. Throughout the 1990s, with Syria stagnant and Russia plunged into economic and political chaos, this outstanding debt cast a chill over relations between the two countries. This chill has now thawed. In 2005, Moscow agreed to write off 73 percent of the debt. This reduced Syria's foreign debt to less than 10% of its GDP, allowing Damascus once more to focus on arms procurement. Large-scale purchases of arms from Russia began that same year.

Over the following two years, according to Israeli sources, Syria purchased 50 Pantsir SE-1 and Tor-M1 air-defense systems from Moscow. Sophisticated anti-tank guided weapons systems were also acquired. There are conflicting reports as to whether the Pantsir air defense systems had been fully deployed at the time of the successful IAF raid on a suspected Syrian plutonium reactor in September, 2007. The raid, in any case, undoubtedly represented a significant failure for the Syrians.

The Syrian response has been to accelerate the pace of arms purchases from willing Russia. In May, a senior Syrian delegation headed by air force commander General Akhmad al-Ratyb visited the Russian capital. The delegation secured the purchase of Mig-29 SMT fighter aircraft.

This time around, the leading item on Assad's shopping list is thought to be the sophisticated S-300 long range anti-aircraft missile system. This state-of-the-art system has already been purchased from Russia by Iran. Iran is expected to deploy it by March, 2009. The Iranian intention, clearly, is for this system to be used in defense of Teheran's nuclear program.

Assad, in his previous visit to Moscow in December, 2006, made unsuccessful attempts to purchase the S-300. Israeli diplomats have been working to try to prevent a successful Syrian acquisition this time around. The outcome is not yet clear. The S-300 is thought to be the leading item on Assad's list of planned purchases in Moscow. A series of public statements by Russian officials over the past days stressing (and exaggerating) Israel's defense relationship with Georgia could be interpreted as a negative sign, but nothing is yet certain.

What lies behind Russia's growing interest in arms supplies to the Middle East? This is part of a larger picture - Russia's return as a player on the global diplomatic stage. The Russians would like to leverage their supply of arms to Iran and Syria into influence, forming an alternative address for diplomatic mediation - or for help in challenging enemies. Either way, Russia intends not to have its voice ignored. The days when all other countries automatically accepted US predominance on issues of Middle East statecraft have passed.

Of course, Russia is still far too weak a state to be able to provide a real challenge to the western system of alliances in the Middle East. Syria, too, for all its rhetoric, possesses armed forces which still suffer from acute structural and educational problems, as well as the problem of norms which limit their ability to successfully absorb and operate ultra-modern systems. Still, something is changing.

The regional alliance of Iran and its allies is currently acting as a 'spoiler' in many flashpoints across the region - Iraq, Lebanon, the Israeli-Palestinian arena, Kuwait and the Israel-Syria-Hizbullah triangle. In all these linked arenas, influence is being built through the exacerbation of conflict, and the preventing of peaceful development. Iran and Syria have had the good fortune to meet a major power - Russia - whose interests happen to currently coincide with the strengthening of anti-status-quo powers in the Middle East. The result is a relationship based on mutual benefit. President Assad will be hoping to reap tangible gains from this as he makes his way through meetings with the power elite in Moscow over the next two weeks.

Jonathan Spyer is a senior research fellow at the Global Research in International Affairs Center, IDC, Herzliya.
This article can also be read at http://www.jpost.com /servlet/Satellite?cid=1219218602214&pagename=JPost%2FJPArticle%2FShowFull
Posted by GS Don Morris, Ph.D./Chana Givon at 4:25 PM