A Saudi website quotes a Lebanese MP as claiming that Hezbollah possesses chemical weapons that were sent to them by Syrian President Assad. According to the report, Iran also helps the terror organization and manufactured delivery systems for them. “These devices are a threat to regional stability,” he said.
Rachel Avraham
"We received chemical weapons from Assad," Hezbollah activist Photo Credit: AP 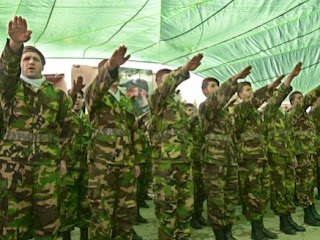 “Hezbollah has rockets that have the ability to be launched with chemical warheads on them in the long term,” Lebanese MP Khaled Daher claimed on the Saudi website Al Watan.  He stated that the Hezbollah terrorist organization received chemical weapons from Syrian President Bashar Al Assad.
According to the Saudi report, the Iranian Revolutionary Guards manufactured delivery systems for the Shiite terror organization and they are located in “Southern Rimal, Jaroud, and Sanin in the area of Baalbek.  Additional mounds were found at Bakir and other sites, some of them underground.”   The Lebanese Interior Ministry fears that Hezbollah will use the rockets against Assad’s opponents in Syria.

The Saudi website noted that the senior Lebanese official described a well-known insider that is familiar with Hezbollah developments in Syria.  He claimed that Hezbollah has a long-range plan to launch missiles that may utilize chemical warheads.  Hezbollah opponents in Lebanon are concerned about the terror organization’s activities in Syria, especially given that Hassan Nasrallah threatened recently that “Israel will deal with something that they didn’t deal with in the past.”

Daher claims that the “something” that they didn’t with in the past was the ability of Hezbollah to launch rockets with chemical warheads at relatively distant distances, such as Tel Aviv or cities in South-East Syria.

Nasrallah possesses chemical weapons?
“We believe that these devices are a threat to regional stability,” Daher, one of the most known opponents of Hezbollah in the area, said.  “They serve the interests of Iran; they cause us to not request help from the international community.  There are areas where no man can enter.  This illustrates how serious their fighting methods affect surrounding areas.  I am sure there are long-range missiles there held by Hezbollah.”
Posted by GS Don Morris, Ph.D./Chana Givon at 8:13 AM