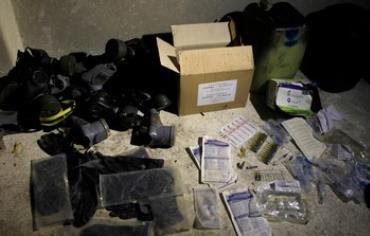 Chemical materials and gas masks are pictured in a warehouse at the front line of clashes in Syria. Photo: REUTERS
German companies supplied Syria’s regime with dual-usage chemicals, which can be applied for military and civilian use, as late as 2011.

The chemicals involved – sodium fluoride, hydrofluoric acid and ammonium hydrogen fluoride – can be used to manufacture sarin, the deadly nerve gas used during the August 21 attack on the edge of Damascus, which killed more than 1,400 people, according to the US government.

Merkel told ARD television before her election victory, “We are of course looking into all allegations on this, but from what we can see so far the export license was for civil use.”

According to the new ARD report, German companies delivered roughly 350 tons of dual-use chemicals to Syrian President Bashar Assad’s regime between 1998 and 2011. The previous known total of Germansold chemicals to Syria was 135 tons between 2002 and 2006.

The exports included 270 tons of fluoride, which is key in the manufacture of sarin.

Under the European Union’s legal framework, the chemicals sold to Syria were designated as dual-use goods. Germany’s export agency BAFA has a liberal permit policy and has been criticized over the years for failing to clamp down on dual-use goods sold to Iran.

The German government said two weeks ago that there was no data bank or control mechanisms available to check on a regular basis the end use of the dual-use deliveries.

Meanwhile, Israel’s ambassador to Bulgaria, Shaul Kamisa-Raz, urged the EU to help Bulgaria absorb the flow of Syrian refugees into the southeastern European country, the Sofia news agency and the BGNES news agency reported on Saturday. “Some of the refugees may integrate in the Bulgarian society, but this will be a very difficult task for the government,” Kamisa-Raz said.

BGNES quoted Kamisa-Raz saying, “Our nation and our government are sympathetic to the suffering of millions of Syrians, and especially to the over 2 million refugees who moved to various places around the world.”

Referring to treatment of injured Syrians in Israel hospitals, the ambassador continued, “There is an open door on our border for the Syrians who are wounded and seeking shelter.”