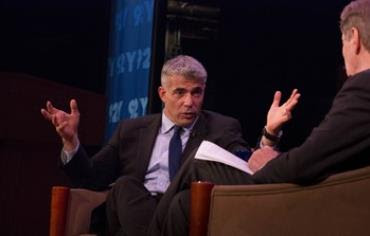 “We recognize Israel as a Jewish state,” he said. “We don’t need authorization from anyone else.”

Rose, in true journalistic fashion, quoted Lapid’s own words back at him, words in which Lapid had said he does not support splitting Jerusalem for a Palestinian state and that “Israel should not change its policies to revive the peace process.”
Given this, Rose asked, “how do you differ from Netanyahu?” “I’m a devoted supporter of the peace process,” Lapid said.


“But that may mean some of the settlements have to be evacuated.”
“I’m not looking for a happy marriage with the Palestinians,” he said. “I’m looking for a divorce.”
Lapid spoke to Rose twice on Monday, once in a taped interview in the afternoon and again at the 92nd Street Y in the evening in front of a full audience of Jewish community leaders.
When asked what should be done about Iran, Lapid quoted US Secretary of State John Kerry in his own CBS 60 Minutes interview when he said, “A bad deal is worse than no deal.”
Lapid added that he was in favor of the type of diplomacy that took place in Syria, the kind with a “credible military threat behind it.”
Toward the end of the interview, Rose broached the topic of Lapid’s future political ambitions.
Lapid paused and gave a small smile.
“Well, I didn’t come into politics in order to make things stay the way they were,” he said. “[In] some of the things, we need a dramatic change, and it doesn’t matter if I do it as minister or prime minister, as long as I remember why I’m there and keep my eyes on the ball.”
Rose and Lapid spent most of the conversation touching on the usual talking points that concern most American Jews these days: the Palestinian conflict, the Syrian war and the Iranian nuclear program, although he purported to want to focus on the local, down-to-earth issues of everyday Israelis.
In front of an audience on Monday he declared that he lives in Israel “because I want to live in a country that’s a place but also an idea.”
It’s safer to be a Jew in New York than in Israel, Lapid said, courting controversy at home.
These comments piggybacked off remarks Lapid made on his Facebook page on September 30, following an interview on Channel 10, that he was “a little impatient” with people leaving Israel to live in Berlin.
Back in Israel, coalition and opposition MKs criticized Lapid for the remark, saying he sounded like he was discouraging aliya.
“Lapid needs to decide if he’s for people leaving Israel or against it,” MK Yoni Chetboun (Bayit Yehudi) said. “Living in Israel isn’t about security, it’s about Zionism.”
Labor Party MK Nachman Shai said that “20,000 Jews in Berlin or a million-and-a-half in New York are not more or less safe than the 6.5 million Jews in Israel. Israel is the homeland of the Jewish people – [Lapid] must remember that and lead with that message.”

Striding onto stage in the typical Israeli politician’s uniform of an open-collared shirt, no tie and a sports jacket, Lapid spent most of the interview cracking smiles and making small jokes, such as teasing Rose about his latent political aspirations.

Rose, who had recently conducted similar interviews with Prime Minister Binyamin Netanyahu, Iranian President Hassan Rouhani and Syrian President Bashar Assad, began the interview by asking his former fellow journalist why he chose to make the switch from journalism to politics.

In short, Lapid said, after so many years of telling people what was wrong with the country, he felt it was time to put his money where his mouth was.

“Being a journalist is being on the sidelines to some extent,” he said, “or that’s the way I felt about it. So I had to move into the field and try to change all the things I felt were wrong.”

He joked that “I’m making a quarter of what I used to make, and working twice as hard, but at least everyone hates me.”

In the end, he said he was aiming to make Yesh Atid “the voice of normality,” to deal with “real problems of real people.”

Lapid’s event at the 92nd street Y was cosponsored by the Y and the Israel Policy Forum.