Seven Reasons Why Israel Will Never Get a Fair Shake 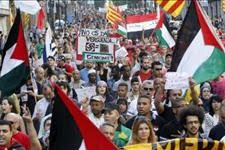 "Never again." It's what the world said after the Holocaust. Fast forward sixty five years and the only thing standing between seven million Jews in Israel and a 2nd Holocaust is their ability to fight for their own survival and the increasingly inconsistent support of the United States. It doesn't matter that Israel is a beacon of Western civilization surrounded by terrorist-supporting nations, dictators, and rogue states. It doesn't matter that Israel could obliterate the Palestinians and take their land in a few weeks’ time if they so desired. It doesn't even matter that the Israelis are engaged in a low level defensive war with what could fairly be called the most depraved and despicable society on earth. No matter how grave the provocation or how clearly Israel is in the right, the world's judgment is always against Israel. Why? Anti-Semitism: During World War II, with a few exceptions, nations all over Europe couldn't wait to ship their Jewish population off to the gas chamber and undoubtedly, many a Jew-hater today, particularly in Europe, learned it sitting on his grandpa's knee. That's doubly true in the Muslim world, where anti-Semitism and Islam seem to go together like peanut butter and jelly. The Nazis may have been reduced to groups of laughable misfits, but their views of Jews have gone mainstream across much of the Middle East and Europe.

The Have-Nots vs. the Haves: To many people on the Left, the actual facts on the ground are of secondary importance to the identities of the combatants. You see, there's an assumption oftentimes made by the Left that in a conflict between "haves" and "have-nots," the "have-nots" are always right simply by virtue of the fact that they're "have-nots." The Israelis are a civilized, prosperous, educated, Western pro-American nation with a modern military up against poor, ignorant, uncivilized savages who hate America and fight by killing women and children, throwing rocks, and blowing themselves up. Therefore, no matter what the Palestinians say or do, to many people on the Left, the Palestinians simply have to be in the right by virtue of who they are.

Israel's Situation Outside of People's Reality: Most people, especially most Westerners, cannot truly imagine what it's like to be in Israel's position. Despite their fantastic military, Israel is an isolated, postage-stamp-size nation that's only 8 miles across at one point. They are surrounded by enemies, all of whom would like to kill them down to the last child -- and they will if the Israelis ever become weak or drop their guard. Additionally, the Israelis are locked in an eternal struggle with genocidal Palestinians who have the support of the world, despite the fact that they have no interest in peace today, tomorrow, or ever if it means living next to Israelis.

When civilized people surrounded by sane neighbors -- whose nations have been safe and secure since they were born, who are used to successfully talking their problems out -- try to fathom the daily reality Israelis have to live with, it's difficult for them to even conceive of it.

Colonialism: Today, there's still a deep sense of guilt in Europe about colonialism. They look back at conquering, subjugating, and ruling other nations for profit as a terrible chapter in their history. So, when Western European nations look at Israel, they see it with different eyes than, say the United States, which doesn't consider itself to be a colonialist nation. When many Americans look at Israel, they see a bastion of Western civilization fighting for survival against people who want to finish the job the Nazis started while people from Western Europe look at the same facts and see a dark echo of what they believe was one of the most shameful times in their nation's history.

Fear of Islam: The West has been completely intimidated by Islam. Images of Muhammad? The press is terrified to show them. In Britain, even Catholics are calling for Muslim prayer rooms in Catholic schools. Here in the U.S., we're building a mosque at Ground Zero, which is like building a tribute to the Japanese military. What it all comes down to is that if most Muslims hate and despise Jews -- and let's be honest, they do -- then many completely emasculated Westerners are going to be too intimidated to go against them.

Geopolitics: Yes, Israel is prosperous for its size, but it’s a teeny, tiny isolated nation. The simple reality is that if another country has to choose between having a good relationship with Israel and having a good relationship with Saudi Arabia, Egypt, Iran, Turkey, and the rest of its hostile neighbors, it's much more economically rewarding to stand against Israel. Israel isn't going to be a major market for goods. Israel can't supply your nation with oil. So, for the leaders of many nations, condemning Israel is a dollars and cents decision.

The Blame Game: Failing nations around the world often try to gin up anger at scapegoats to distract their citizens from the poor job their rulers are doing. The United States plays this role for many nations. To a lesser extent, so do the British. Unfortunately for the Israelis, they are surrounded by failing, dictatorial states run by religious fanatics who'd much rather have their people raging at the Israelis rather than wondering why the country they're living in is so backwards. Do you think the Saudi royal family would rather have people talking about the Palestinians or why that country is still run by a monarchy in the 21st century? Do you think Iran wants people talking about the Palestinians or the fact that their economy is in shambles and the people are ready to revolt? Even if there wasn't a single Middle Eastern leader who was a raving anti-Semite, there would STILL be every incentive to gin up hatred against the Jews.