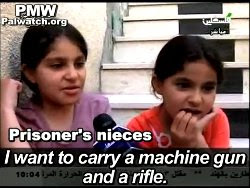 by Itamar Marcus and Nan Jacques Zilberdik
PA TV chose to honor the female Palestinian terrorist Sanaa Shehadeh by visiting her home, interviewing her family and broadcasting her two young nieces dedicating an anti-Israel war song to her. Sanaa Shehadeh is serving 3 life sentences in an Israeli prison for transporting a suicide terrorist to Jerusalem in 2002. Three civilians were killed and dozens wounded in the attack on King George Street. The hate song chosen by the girls, which they knew by heart, included the words, "I want to carry a machine gun and a rifle," and, "We shall strike Israel."

The girls were filmed outside the terrorist's home and appeared in a prerecorded feature on official Palestinian Authority TV about Palestinian prisoners in Israeli jails.

The following are the words of the song dedicated to the terrorist on PA TV:

Comment: Where are the child protection groups-peace now folks or the "we care about people" groups? Oh, they look away! Preparing the next generation of haters and until the international community stands up, with a firm spine, and demands this cease, there is no hope for peace!
Posted by GS Don Morris, Ph.D./Chana Givon at 6:08 PM