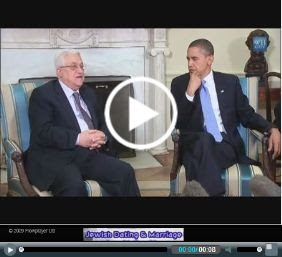 “The situation in Gaza is unsustainable – [as is] the status quo in the entire Middle East.” So said U.S. President Barack Obama after meeting with Palestinian Authority chairman Mahmoud Abbas in Washington on Wednesday. See video below. Obama repeated several times that a new solution other than a maritime blockade on Gaza must be found to address “Israel’s legitimate security needs.”

The President also mentioned, once, the need for “more progress on both security as well as incitement issues” – to which Abbas responded, “I say in front of you, Mr. President, that we have nothing to do with incitement against Israel, and we’re not doing that.”

In actuality, however, the most recent report by Palestinian Media Watch shows that “the Palestinian Authority, the Fatah leaders and the Abbas-controlled official PA media continue to deny Israel’s existence, deny Israel’s right to exist, define the conflict with Israel as an uncompromising religious war for Allah, promote hatred through demonization, slander and libel, and glorify terror and violence.”

PMW states that the PA and Fatah leaders make moderate statements to Western powers in English, in contrast to what they tell their own people in Arabic. The full PMW report may be seen here. [article continues below]

Obama: Two-State Solution
Obama reiterated that “a lot of work… remains to be done so that we can create a two-state solution in the Middle East in which we have an Israel that is secure and fully accepted by its neighbors, and a Palestinian people that have their own state, self-determination, and the ability to chart their own destiny.”

Regarding the flotilla and the blockade on Gaza, Obama said that he and Abbas discussed how they could promote “a better approach to Gaza.” Obama acknowledged that Israel “should not have missiles flying out of Gaza into its territories,” and even noted that “I think President Abbas agrees with this.” However, he said, “we also think that it is important for us to explore new mechanisms so that we can have goods and services, and economic development…” in Gaza. “And so we are going to be working hand in hand to make sure that we come up with a better approach.”

Questions on Obama's Proposal
“It seems to us,” Obama later explained, “that there should be ways of focusing narrowly on arms shipments, rather than focusing in a blanket way on stopping everything and then in a piecemeal way allowing things into Gaza.” He did not elaborate on how “focusing narrowly on arms shipments” would stop arms arriving as hidden contraband smuggled in among food and medicine supplies.

In the meantime, Obama said, the United States “is going to be announcing an additional $400 million in assistance for housing, school construction, business development -- not only in Gaza, but also in the West Bank, because we think it’s important for us to reaffirm once again our commitment to improving the day-to-day lives of ordinary Palestinians.”

Asked how the distribution of the money will be overseen, given the “problems” – others have accused PA leaders of downright corruption – in this area in the past, Obama said only, “”I’ll let my team give you the details in terms of how that will be administered and how the money will begin to flow.”