Use of child labor not stopped by police in Gaza, where children's "nimble bodies" help dig the tunnels that lead into Israel and Egypt. 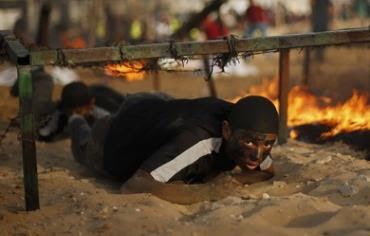 Palestinian youngsters in Gaza take part in a Hamas military training camp. Photo: REUTERS
Hamas used children to help them dig numerous tunnels into Israel and Egypt, a 2012 paper written for the Journal of Palestine Studies reported.
The paper, titled Gaza's Tunnel Phenomenon: The Unintended Dynamics of Israel's Siege says that little had been done to stop the phenomenon of child labor during the digging of the tunnels by Hamas in Gaza.

In December 2011, the paper's author Nicolas Pelham accompanied a police patrol in Gaza and reported that "nothing was done to impede the use of children in the tunnels, where, much as in Victorian coal mines, they are prized for their nimble bodies."

He continued and said that "at least 160 children have been killed in the tunnels, according to Hamas officials."
Since the beginning of Operation Protective Edge 21 days ago, IDF forces have uncovered 31 tunnels leading into Israel.
More than 1,000 Palestinians, mainly women and children, have been killed during the offensive.
Posted by GS Don Morris, Ph.D./Chana Givon at 6:48 PM