Deputy FM Hanegbi says that “instead of blaming Israel, UNRWA should make a real effort to stop being manipulated by terrorist organizations.” 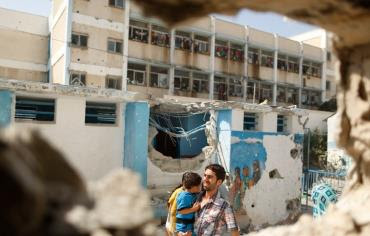 UNRWA school damaged by fighting in Gaza Photo: REUTERS
Israel has ample evidence that Hamas is using UNRWA schools and facilities for terrorist purposes, Deputy Foreign Minister Tzahi Hanegbi said Wednesday.
Speaking at a press briefing in Jerusalem, he pointed out that on three separate occasions UNRWA itself has admitted that rockets were hidden in the basement of their facilities. “Who knows how many were not found,” he said, adding that this phenomenon was “totally unacceptable.”
Each time that the rockets were found, he said, they were given back to Hamas and have probably already been fired at Israel, “endangering and jeopardizing Israeli lives.”
“Instead of blaming and condemning Israel, UNRWA should make a real effort to stop being manipulated and used by the terrorist organizations.”
While saying that over a span of decades UNRWA “has done a great job helping the Palestinians in Judea, Samaria and the Gaza Strip,” especially giving “blessed refuge for people leaving combat areas to save themselves,” the organization has failed to prevent its facilities from being used as terror headquarters and a hiding place for rockets.

Health officials in Gaza said Wednesday that Israeli shelling killed at least 15 Palestinians sheltering in a UNRWA school in Gaza's biggest refugee camp on Wednesday.
Some 3,300 Palestinians, including many women and children, were taking refuge in the building in Jabalya refugee camp when it came under fire around dawn, the United Nations Relief and Works Agency (UNRWA) said.
"Our initial assessment is that it was Israeli artillery that hit our school," UNRWA chief Pierre Krahenbuhl said in a statement after representatives of the agency visited the scene and examined fragments, craters and other damage.
An IDF spokeswoman said militants had fired mortar bombs from the vicinity of the school and troops shot back in response. The incident was still being reviewed.
Reuters contributed to this report.
Posted by GS Don Morris, Ph.D./Chana Givon at 8:53 PM