Israel says it is "deeply disappointed" by the United States’ readiness to work with the new PA unity government. 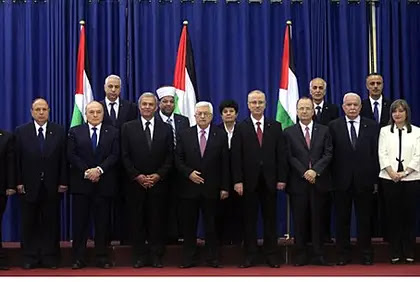 "If the U.S. administration wants to advance peace, it should be calling on (PA Chairman Mahmoud) Abbas to end his pact with Hamas and return to peace talks with Israel," the official said.
"Instead, it is enabling Abbas to believe that it is acceptable to form a government with a terrorist organization."
The remarks come in response to a statement earlier by State Department  spokeswoman Jen Psaki, who said Washington believes Abbas has "formed an interim technocratic government... that does not include members affiliated with Hamas."
"With what we know now, we will work with this government," Psaki said.
The new PA unity government was sworn in on Monday in Ramallah, the first such unity government for seven years.
"Today, with the formation of a national consensus government, we announce the end of a Palestinian division that has greatly damaged our national case," Abbas said.
"This black page in history has been turned forever," he said in remarks echoed by the outgoing Hamas government in Gaza.
"We hail the national consensus government, which represents all the Palestinian people," Hamas spokesman Sami Abu Zuhri told AFP.
The Israeli Cabinet subsequently decided not to engage politically with the new government, as part of the policy not to negotiate with terrorists.
In an official statement, Prime Minister Binyamin Netanyahu said “Abbas said 'yes' to terror, not peace It is the direct continuation of Abbas's policy to refuse peace, while Israel has made courageous and painful steps for the political process and remains committed to peace.”