How One Democratic Congresswoman Could Spoil the Party for Hamas 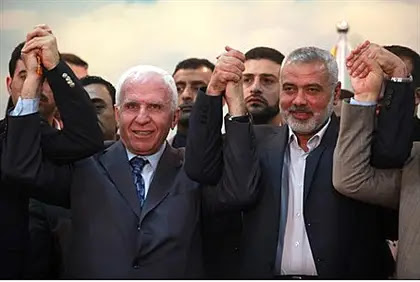 Will Nita Lowey spoil the party?
Flash 90
America grants the Palestinian Authority about $500 million annually; the fast-spinning money meter has already broken the $5 billion mark over the years. The annual financial infusion has been on autopilot as Israelis and Palestinians negotiated over the meters and metrics of a two-state solution. American money has been lavishly spent on the Palestinian Authority for one purpose: to encourage the peace process.
Recently something changed. The Palestinian Authority unified with Hamas, making it the largest, best organized, and best armed terrorist entity in the world. Hamas, long designated a Foreign Terrorist Organization, is well-known for showering Israeli civilians with rockets and for leading the deadly suicide bombing campaign against Israeli civilians during the Second Intifada. Quickly dashing any hopes of change, Hamas did not disband its highly-armed and trained militias, vowed to never recognize Israel, and barred pursuing joint peace.

Newspapers have been filled with headlines recently about how Congress is preparing to defund the Palestinian Authority because various federal laws make continued cash infusions under present conditions illegal, and because further money would be antithetical to America’s pro-peace and anti-terrorism policy.
While many of the names of House and Senate leaders have been bandied about, most Congressional sources arguably agree that the most important lawmaker is Rep. Nita Lowey, the ranking Democrat from Westchester County, NY. Lowey sits on both the full Appropriations Committee and the key subcommittee governing State, Foreign Operations, and Related Programs. Foreign assistance begins and dies in this subcommittee. The Republican side of the aisle has been lining up staunchly against continuing funding and invoking the mandatory legal brakes. This includes subcommittee chairwoman Kay Granger from Dallas, who has asserted that unification “puts in jeopardy future U.S. assistance to the Palestinian Authority.”
The Obama Administration, however, has signaled it is ready to continue funding the new Hamas-infused Palestinian Authority.
Therefore, all eyes now fall on Lowey. For her, this is a leadership moment. Will she break with her party and the Administration?
Lowey’s personal and legislative feelings have been made abundantly clear. “At this point, the law is clear, their actions are clear, and the path forward is clear,” Rep. Nita Lowey told the JTA news service immediately after news of the Hamas union became known in late April. Monday, June 2, after the unification ceremony finished in Ramallah, Lowey issued this short warning: “I am deeply disappointed with the announcement today of a Palestinian government that includes the terrorist organization Hamas. As long as Hamas rejects the Quartet principles and the existence of the State of Israel, United States funding for this unity government is in jeopardy.”
Early June 4, 2014, a source close to Lowey confirmed her feelings remain unchanged, Indeed, within 10 seconds of asking, he emailed this reporter the relevant section of one of several key legal bars to continued funding. The Consolidated Appropriations Act, in Section 7020, Subsection F, entitled Prohibition to Hamas and the Palestine Liberation Organization, unambiguously declares: “None of the funds appropriated … may be obligated or expended for assistance to Hamas or any entity effectively controlled by Hamas, any power-sharing government of which Hamas is a member, or that results from an agreement with Hamas and over which Hamas exercises undue influence.”
The Lowey source explained, “The law is clear-cut, but what makes it complex is there are also important considerations – are we subjecting ourselves to more danger? For example, is there a particular security assistance program? Should we stop that? Or, is it smarter to keep some of those of those programs going?” The staffer conceded the notion of a drastic cut with carve-outs for special security programs. However, the source added, “The Administration seems to be ‘all systems go’” in terms of unrestricted funding.
Lowey is now posed between the law and common sense on one hand, and her own party and extenuating circumstances on other hand. “Rep. Lowey appreciates the important considerations on all sides,” the source stated. “But, also, this law it is written that way for a reason, and this law has been agreed to by the overall majority of Congress and signed in to law by the President.”
There are presidential override provisions, “but that formal procedure has not yet been invoked,” the Lowey source assured.
In the meantime, momentum is fast-boiling through Congress to reach a bi-partisan consensus that funding must stop. The latest is a “Dear Colleague” letter and resolution jointly spearheaded by Representatives Trent Franks (R-AZ) and Michelle Bachmann (R-MN) seeking a “sense of the House” that “Congress must suspend our foreign aid and support to the Palestinian Authority, as continued foreign assistance runs in direct contravention to current law.” A five-page House Resolution has just circulated demanding that all funding stop unless the PA-Hamas unity is unraveled, and the Ministry of Prisoners, that pays monthly salaries to terrorists, is disbanded.
No one knows how Lowey will vote, not even her own staff. One key staffer remarked, “I just don’t know yet. She is in consultations daily, if not hourly, with personnel at the White House and State Department.” He stated the process would come to conclusion by the legislative deadline, October 1, 2014.
Asked if Lowey would be willing to break with her party and the Administration over this issue, the answer was immediate: “Of course.” Hence, the future of Palestinian funding will be written or unwritten, by Lowey.