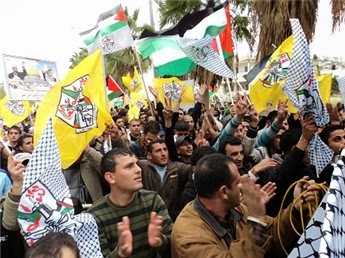 An official, speaking on the condition of anonymity, told Ma'an Saturday that Gaza's chief Fatah leader Zakariyya al-Agha submitted the body's resignation in protest against interference in Gaza affairs by the Fatah Central Committee.

It has been difficult to find solutions to problems Fatah members in Gaza have faced since 2006, when Hamas one legislative elections, the official added.

He said Fatah officials in Gaza had not been receiving regular salaries, and that families of "martyrs" had not received allowances for six years.

The West Bank and the Gaza Strip have been effectively led by separate governments since 2007, when events occurred that violently divided Fatah and Hamas.

The division between the two Palestinian factions began in 2006, when Hamas won legislative elections.

In the following year, clashes erupted between Fatah and Hamas, leaving Hamas in control of the Strip and Fatah in control of parts of the occupied West Bank.

The groups have made failed attempts at national reconciliation for years, most recently in 2012, when they signed two agreements -- one in Cairo and a subsequent one in Doha -- which have as of yet been entirely unimplemented.
Posted by GS Don Morris, Ph.D./Chana Givon at 8:16 PM