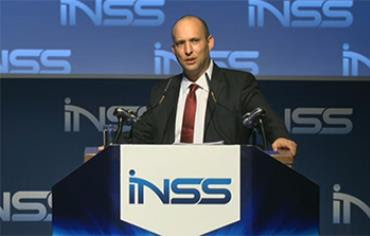 Naftali Bennet speaking at INSS conference January 28 2014
Bayit Yehudi leader Naftali Bennett addressed a security conference in Tel Aviv hosted by the Institute for Nation Security Studies (INSS) on Tuesday.
“People said that giving back land would bring security, but in the year 2000, terrorism was rampant in the streets of Haifa, Tel Aviv and Jerusalem,” he said.
Jews cannot live under Palestinian sovereignty for the simple reason that if they do they will be killed, he said.
Not only did Bennett not back down from criticisms he sounded Monday against Prime Minister Binyamin Netanyahu’s suggestion that the settlements may remain under Palestinian sovereignty in a future agreement, but he ratcheted up his criticism.

“It will not happen, and cannot happen,” Bennett said of the idea. “You know why Jews can’t live under Palestinian sovereignty? Why? Because they will kill them. How do I know, because it happened.”
Bennett said it happened in 1929 in Hebron, when the ancient Jewish community there was butchered by their Arab neighbors, and it happened again in 2000 when two reservists made a wrong turn and were lynched after being taken to the Palestinian Authority police station in Ramallah.
Everyone knows, he said, that if an Arab wanders into to Herzliya he will leave safely, but that if a Jew gets lost and ends up in Jenin he will be killed.
“We all came here to the land of Israel in the name of Zionism,” he declared. “The essence of Zionism is sovereignty. If there is no sovereignty there is no Zionism.”
He said that placing Jews under foreign rule would be a Zionistic U-turn.
“We tried it in Europe, and it did not really work,” he said, just an hour after getting back from what he said was his first trip to Poland and Auschwitz as part of a Knesset delegation.
“We were always proud that only a Jewish army will defend the Jews. What has happen too us. What is the significance of even raising this idea. What does it say about us.”
Bennett said that from security and practical reasons, and first and foremost because of values of Zionism, “I suggest and demand that this idea be removed from the agenda.”
Bennett called on the international community not to use Israel as an experimental lab. “People live here with dreams, families, and very difficult experience. What is the price we pay when you play with our fate. The Israeli public won’t let that happen any more.”
Regarding his alternative, Bennett suggested his pre-election plan to restrict the points of friction and declare Israeli sovereignty over the “Israeli parts of Judea and Samaria, where 400,000 Israelis, and only 70,000 Palestinians live.” He said those Palestinians will be offered full Israeli citizenship.
In the rest of the territory he said the Palestinians would enjoy full autonomy, hold their own elections, pay and collect their own taxes, build for themselves, and create transportation continuity so there will be free movement in Judea and Samaria.
“Is this perfect? He asked. “No it is not perfect, But is it much better than the fantasy of putting in the heart of our land an enemy state? Yes.” He called on everyone to “grow up” and discard the illusion that every problem has a perfect solution.