Pollard's Imprisonment 'Absurd' Given US Spying 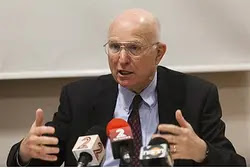 Dr. Lawrence Korb
nce Korb on Saturday night said that Jonathan Pollard's ongoing imprisonment, in light of new revelations of US spying on Israeli leaders, is "absurd" and a "moral embarrassment."
Korb's comments come as US President Barack Obama omitted Pollard from the 13 pardons he issued last Thursday. In addition to the 13, 6 of whom were drug dealers, Obama commuted the sentence on 8 other criminals, all of them drug dealers.
"The lack of proportion of Pollard's sentence and his weakening medical condition in any case demands his release by any measure of justice," remarked Korb.
Korb noted the new revelations show "that during the time that (the US is) so stubborn about (Pollard's) continued sentence after 29 years, we ourselves are spying on Israeli leaders."

According to the reports released Friday, America's National Security Agency (NSA), along with British spy agencies, was spying on the e-mail traffic of Prime Minister Binyamin Netanyahu and his predecessor Ehud Olmert.
These revelations "bring the (Pollard) case to dimensions of true absurdity," says Korb, emphasizing that "Pollard's release now isn't just demanded by justice, but will also remove from (the US) moral embarrassment."
When confronted with the revelations on US spying, the White House stated that it "collects intelligence information similar to the information collected by all other countries."
Obama's decision not to pardon Pollard came despite a written offer last week by Prof. Angelo Codevilla, a member of the professional staff of the Senate Intelligence Committee at the time of Pollard's arrest, to give expert testimony in clearing Pollard's name. Codevilla is familiar with the case's file that has been kept secret.
The decision further comes despite a December 10 letter from Bill Richardson, a close confidant of Obama and former US Ambassador to the UN, calling on the president to release Pollard immediately.