A calculated boost to deterrence

Amid recent uptick in violence along Gaza border, the defense establishment has concluded that its hard-earned deterrence against Gaza's terrorist factions is beginning to crumble and may require a boost. 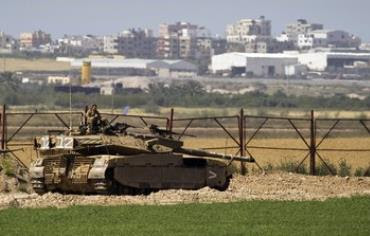 IDF soldier sits atop a tank just outside northern Gaza Photo: REUTERS/Amir Cohen
The defense establishment doesn’t yet know for sure which organization sent a sniper to kill an Israeli civilian on the Gaza fence in cold blood. But it does feel that Hamas was prepared to turn a blind eye to the attack.
That, combined with the fact that an Israeli was shot dead while standing on his own side of the border, was enough to lead the IDF to the conclusion that its hard-earned deterrence against Gaza’s terrorist factions, in place since the end of last year’s week-long conflict, was beginning to crumble again and required a boost.

To be sure, the Gaza border has been anything but quiet of late. Since Friday alone, the IDF felt compelled to open fire five times on Palestinian suspects coming up to the fence and knowingly breaching the security zone, and, in at least two cases, planting explosives near the border. In the past, Hamas did not allow Palestinians to approach the fence.


Now, would-be attackers test the IDF daily, and they “suddenly” found their path to the fence unobstructed. But the defense establishment sees such threats and border clashes as more or less “routine.”

By contrast, Tuesday’s cross-border shooting is viewed as an act of aggression on a different and significantly bigger scale.

In the weeks after Operation Pillar of Defense in 2012, Hamas was keen on licking its wounds and rebuilding its offensive rocket and guerrilla warfare capabilities. To buy time, it established domestic security units that were tasked with tracking down members of smaller terror organizations that were firing rockets at Israel in violation of the truce, and making it clear to them that any further attacks without Hamas’s approval were forbidden.

If the verbal warnings didn’t get through, those firing the rockets were arrested, beaten and incarcerated in Hamas prisons for long periods.

When Hamas wants to, it knows how to keep a quiet southern border. Therefore, when the IDF attacked multiple targets using the air force, tanks and infantry on Tuesday, it sent an unmistakable signal to Hamas and its allies that this would only be a taste of things to come if Palestinian aggression continued under Hamas’s watch.

Additionally, Hamas’s strategic situation remains poor. To the south it faces a hostile Egyptian government that identifies Hamas with its domestic nemesis, the Muslim Brotherhood. Egypt has all but destroyed arms-smuggling tunnels linking Sinai to Gaza, leading Hamas to kick-start its own rocket manufacturing program in the Strip to arm itself with projectiles, some of which can hit greater Tel Aviv and Jerusalem.

The IDF could quickly destroy this armament industry, should Hamas choose to escalate the situation.

Meanwhile, feelers Hamas sent to ex-sponsor Tehran appear to have brought indecisive results. As long as Iran continues to sponsor the war against Syria’s Sunnis, Hamas will never truly be able to stitch back its alliance with it. This does not hold true for Islamic Jihad, which remains an obedient Iranian puppet in Gaza.
Finally, due to Egypt’s full blockade, the Strip receives most of its electricity and water from Israel, and the Kerem Shalom crossing is the only way for commercial goods to get through.

President Shimon Peres’s warning to Gaza, that it is in its interests to cease targeting innocent Israeli civilians for murder, is based on this fact.
The ball is in Hamas’s court.