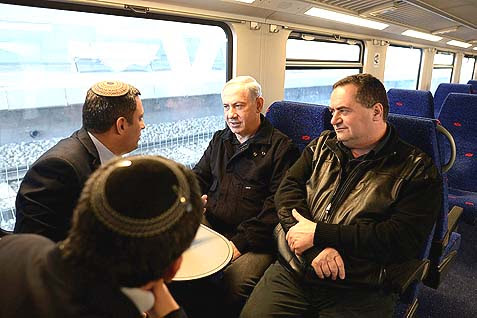 Prime Minister Benjamin Netanyahu on a train to the southern town of Sderot, to inaugurate a new, rocket proof train station. As this picture exhibits, Netanyahu’s political foundation relies on right-wingers (like Minister of Transportation Yisrael Katz sitting next to him) and the Orthodox, without being one himself. He must devise maneuvers to keep the right at his side, while supporting the secularist Ashkenazi elite where he really belongs. Photo Credit: Kobi Gideon /GPO/FLASH90