The red line should go from Tehran to Ramallah


In his UN address, Netanyahu chose not to acknowledge the connection between the Israeli-Palestinian conflict and the effectiveness of an anti-Iran coalition. 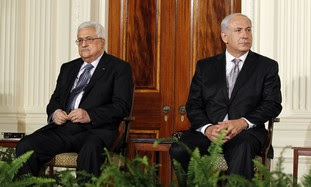 Ostensibly, both Israeli Prime Minister Binyamin Netanyahu and Palestinian President Mahmoud Abbas focused on separate subjects in their UN addresses: Netanyahu on the need to halt the Iranian nuclear program; Abbas on the need to end Israeli occupation and establish Palestinian statehood. However, neither drew the connection between the two supposedly separate issues they addressed – a link that would make progress on both issues more likely.

Both leaders described a grim picture that was just and true for each. But they did not lay the foundations for a road to a brighter future for their people, or for the Middle East.

Netanyahu and Abbas both addressed international and domestic audiences at the same time. Their subtext was that unless the international community intervenes, other drastic measures will be taken or violence may erupt.

Both used the respective national catastrophes of their people to call on the international community to take action. Abbas, referring to the Nakba (the displacement of the Palestinians that followed the 1948 war), argued that “Israel is promising the Palestinian people a new catastrophe, a new Nakba.”

Netanyahu declared again that a clear red line must be delineated to stop Iran’s nuclear program, pointing to Tehran’s denial of the Holocaust and asserting that the world’s failure to draw such a line in the 1930s enabled the bloodbaths of World War II.

At the podium Netanyahu then literally drew a red line near the top of a sketch of a bomb to illustrate where, in his view, Iran’s uranium enrichment must be halted. He should have drawn his red line on a map connecting Tehran to Ramallah.

That’s because to forcefully tackle Iran’s nuclear program, the US will have to create an international coalition beyond the one it has already assembled to impose sanctions on Iran. And this coalition must include the moderate Arab and Muslim countries, most notably Egypt, Saudi Arabia and Turkey, in order not to exacerbate tensions between the Western and Muslim worlds.

However, the increasing power of the people of Middle East will not allow the heads of these countries to join a US-led coalition unless there are clear signs of progress in resolving the Israeli-Palestinian conflict and establishing a Palestinian state.

The Arab street views such progress as the paramount test of US leadership. Thus, trust that Israel is sincere about reaching a two-state solution and hope that a resolution is feasible need to be restored.

TO REINSTATE trust and hope, and to ensure Israel’s future as a secure, democratic homeland for the Jewish people, Netanyahu must do more than hail Israel’s open and innovative society in speeches at the UN. He needs to reaffirm Israel’s commitment to the two-state solution.

Even more importantly, he must demonstrate it by taking tangible steps that gradually create a reality of two states for two peoples. This will also enable the world to present a uniform coalition to confront Iran’s nuclear program and the forces of radical Islam.

Such a message by Netanyahu could draw on the Arab Peace Initiative, further encouraging moderate Arab states to join an anti-Iran coalition. It should aim at creating a sense of progress and hope, which was lacking from both UN addresses. Constructive measures would replace the negative rhetoric and dramatically increase Israel’s influence.

These steps would not obstruct a return to negotiations at any point. Such constructive actions should include a statement of Israel’s willingness to return to negotiations and a declaration that Israel does not have any sovereignty claims over areas east of the security fence. These would lead to complementary domestic measures, such as a voluntary evacuation-compensation law for settlers living east of the fence so that those who wish can begin relocating to within Israel proper, and a blueprint for the absorption of all settlers who relocate.

These internal steps, proposed by the non-partisan Israeli organization Blue White Future, will go a long way toward conveying Israel’s sincerity to the Arab world and international community.

In his UN address, Netanyahu chose not to acknowledge the connection between the Israeli- Palestinian conflict and the effectiveness of an anti-Iran coalition. If, instead, he had chosen to draw the red line from Teheran to Ramallah, he could have made Israel more secure and the Middle East less unstable.

The author, a former director of Shin Bet, is a co-founder and member of the Board of Blue White Future, a non-partisan, Israeli organization (bluewhitefuture.org). He served as commander-in-chief of the Israel Navy and was appointed to the Israel Cabinet as a minister without portfolio in 2007, becoming chairman of the Ministerial State Control Committee and a member of the security cabinet.
Posted by GS Don Morris, Ph.D./Chana Givon at 7:05 AM