Member of Fatah Central Committee Aloul says "no one has dropped armed resistance from his dictionary," points out Fatah political program has reaffirmed "resistance is legitimate right against occupation." 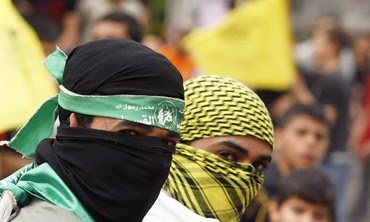 Photo: REUTERS/Ismail Zaydah
The Palestinians have not abandoned the option of armed struggle against Israel, a top Fatah official in the West Bank said on Monday.

Mahmoud Aloul, a member of the Fatah central committee and former Palestinian Authority governor of Nablus, said that although the Palestinians have agreed to launch a “popular resistance against occupation, no one has dropped the armed resistance from his dictionary.” Aloul’s comments were made during an interview with the private Watan TV station in the West Bank.


He pointed out that Fatah’s political program had reaffirmed that “resistance is a legitimate right to resist the occupation.”
Aloul added, however, that “each option of the resistance requires certain conditions to be carried out.” Therefore, he explained, there was a consensus that the resistance should at this stage take the shape of a popular struggle.
Aloul criticized the PA leadership for raising expectations about the establishment of a Palestinian state.
“The Palestinian leadership has committed a sin regarding the creation of an independent Palestinian state,” he said.
“Building hospitals and schools does not mean that we are able to declare a state. Palestinians pinned high hopes on the messages they received from their leadership.”
Aloul cautioned that Palestinians were now in a state of suffering and depression because they felt that their leadership had misled them into thinking that they were close to achieving statehood.
The Fatah official said that the Palestinians’ red lines remained as solid as ever; the establishment of a Palestinian state on the pre-1967 lines, “liberating” Jerusalem, removing the settlements and solving the issue of Palestinian refugees.
Aloul said that the PA decided to suspend the peace talks with Israel because they were a waste of time. “When there is a new atmosphere for conducting the negotiations, we will return,” he said.
“But first we want to know what we are going to negotiate about.”