"Some settlers are 'interested in making peace' with the Palestinians," a rare headline stated in the official Palestinian Authority daily last week.

A reprint from Agence France-Presse, the article repeated the remarks of two Israelis who live in the West Bank. It described how a Palestinian obtained a building permit in the West Bank with the help of an Israeli man, Eliaz Cohen, who "as opposed to the vast majority of settlers, thinks that peace will be achieved through mutual recognition of each party's rights to the land itself."

The article went on to describe how another Israeli, Nahum Pachenik, who looks "like the typical extremist settler who is far from any dialogue with Palestinians," founded the Land of Peace movement which "promotes religious, social, and economic cooperation with Palestinians," and has "1,700 members, of whom 150 are Palestinians [and] the rest are settlers."

Pachenik was quoted describing how the movement has "arranged inter-religious meetings, distributed packages to the poor, arranged demonstrations against the separation (i.e., security) fence" and has "many more projects [planned], like working a shared field."

The official PA paper did not comment on the remarks or the initiatives by the Israelis.

Palestinian Media Watch has documented that the PA media rarely publishes positive statements or reports on Israelis and Jews, but has a policy of demonizing them.

Another rare statement was broadcast on PA TV when a Palestinian artist, introducing a painting, acknowledged that there was a Jewish historical period in Jerusalem: 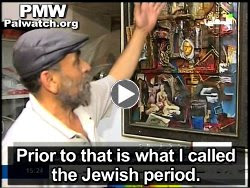 The following is the translation of the AFP article in the official PA daily reporting positively on "settlers interested in making peace":

Headline: "Some settlers are 'interested in making peace' with the Palestinians"
"A Palestinian, Muhammad Saad, recently received permission from the occupation army (i.e., Israeli Defense Forces) to construct apartment [buildings] in the Khirbat Zakaria village in the occupied West Bank.  [This happened] with the help of Eliaz Cohen, a settler from Kfar Etzion (i.e., Kibbutz Kfar Etzion). This village [Khirbat Zakaria] is located in the Etzion settlement (bloc) west of Bethlehem. The Etzion Bloc is made up of 22 settlements in which approximately 70,000 settlers live, and it was built - like all the settlements - on Palestinian land occupied by Israel in 1967.
Cohen, a poet who would like to see dialogue between settlers and Palestinians, explained: 'For three years he [Saad] and I have been struggling together to succeed in this matter.' As opposed to the vast majority of settlers, Cohen thinks that peace will be achieved through mutual recognition of each party's rights to the land itself, and he noted that 'my intention is not to divide the land in two, but to share it with one another.' He added: 'I think that it is possible to have two national entities in the same location, whether in confederation or in two [separate] states. But neither will lose its historic rights to this land, to which both nations are tied.'
In 2010, [Cohen's] friend Nahum Pachenik founded the 'Land of Peace' movement (Eretz HaShalom in Hebrew), to which a small number of settlers belong. It promotes religious, social, and economic cooperation with Palestinians. Pachenik, a father of four who lives in the Etzion Bloc, explained: 'Peace is crucial for us.' This man has a beard and [wears] a traditional kippah (Jewish skullcap) and sandals just like the typical extremist settler who is far from any dialogue with Palestinians. However, [Pachenik, who is] the son of a rabbi [and] who has lived in settlements since the day he was born and doesn't think he'd be able to live anywhere else, says: 'I'm tied to this land, and [here] I'll stay. But the Palestinians are here too, and I have to learn to live with them.'
'Land of Peace' is unusual in settler circles, and it is not popular. At best, it is seen as a group of crazy idealists. Or, it is seen as a group of traitors. Nahum says: 'Am I crazy? Yes. I'm crazy about peace.'
In reality, however, [human] rights organizations warned last July of an escalation in settler attacks...
'Land of Peace' has 1,700 members, of whom 150 are Palestinians. The rest are settlers, [from] among the 500,000 settlers in the West Bank and Jerusalem.
Pachenik says: 'We've already arranged inter-religious meetings, distributed packages to the poor, arranged demonstrations against the separation (i.e., security) fence, and we have many more projects [planned], like working a shared field.' He went on: 'The name of the project is Heaven's Field or Allah's Field (Hakel Allah in Arabic) since as Jews and Muslims we believe that ultimately the land belongs to God. We intend to divide the whole crop among needy families.'
He refuses to suggest political solutions, but he stresses that if the two-state plan is ever adopted, he'll want to continue living in Palestine. He went on [to say]: 'I have the right to be part of a Jewish minority in a democratic Palestinian state, like the million Palestinians who are living in the State of Israel.' And he points out: 'Peace is made in the field, by people of good will, and not in the garden at the White House.'
Ibrahim Anbawi from Ramallah, who is a member of the [Land of Peace] movement, says: 'These settlers are ready to live in a Palestinian state, be part of the Palestinian nation, and carry Palestinian passports.' Nahum Pachenik recently met President Mahmoud Abbas in Ramallah together with a delegation of Jewish clergymen.
Pachenik enthusiastically pointed out that 'the meeting was very important for us, since Mr. Abbas allowed us to continue the dialogue, and that is a step towards peace.' Cohen thinks that 'mentality is changing, and there is a growing number of people among the settlers or Palestinians who are beginning to understand that our futures are bound together, and we have been sentenced to making peace.'"
[Al-Hayat Al-Jadida, Oct. 5, 2012]

Following is the transcript of the PA TV broadcast of artist acknowledging
Jewish period in the history of Jerusalem:

Palestinian artist, Ismail Midya: "This painting represents Jerusalem in different periods. This is the Islamic period. This is the Christian period. Prior to that, is what I called the Jewish period.  This is the Canaanite period. It's important to me and to all Palestinians because it's a map or document."
[PA TV (Fatah), July 24, 2012]
Posted by GS Don Morris, Ph.D./Chana Givon at 8:43 PM