The Lion of Justice 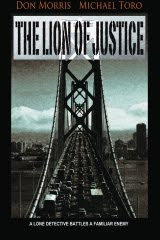 "The Lion of Justice" by Don Morris and Michael Toro

“The Lion of Justice” (ISBN 1463663692), a novel by Don Morris and Michael Toro, describes Islamic terrorists intent on spreading chaos with an attack in the San Francisco area and the efforts of an American-Muslim undercover law enforcement officer to stop them at any cost.

Jake Hakam and his team must hurry to discover the nature of the attack so that they can stop it, but the roots of the plan go deeper than they imagine. Sleeper cells have spent the last two decades infiltrating law enforcement, academia, government and local businesses, waiting for the signal from their sheik to strike. The local chief of police is too bogged down in procedure to do anything to help Hakam, leaving him and his small team on their own in fighting the coming destruction.
The novel demonstrates how a terrorist group with a strong ideological commitment could create, plan and execute a long-range scheme of horrendous atrocities,” says Morris. “It shows also how politically correct institutions contribute to such plans and how they actually assist in their execution.”
Morris and Toro bring their own experience in government and investigations in law enforcement to bear in a story aimed to engage, educate and spur action. The novel is an action-oriented thriller intended to keep readers on the edge of their seats.
“The Lion of Justice” is available for sale online at Amazon.com and other channels.

About the Authors: Don Morris, Ph.D., is a university professor. His work within academia and government spurs him to raise some warning flags regarding terrorism. He is also a blogger and author. He currently shares his time between the U.S. and Israel.

Michael Toro worked in law enforcement investigating terror financing and working with local, state and federal agencies in promoting awareness of the threat international and homegrown terrorism posed to the American public. He continues to work to involve private security and law enforcement groups in raising their awareness. He also works with international security groups to increase awareness as it pertains to the threat of global radical Islam.

You may order the book direct from Createspace: https://www.createspace.com/3638569