‘Jewbags’ and the Democrats’ Anti-Israel Liaison 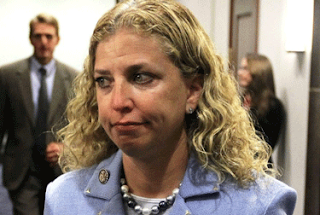 There’s a thin line between anti-Semitism and anti-Zionism. That’s true of Muslims and the left, but it’s also true specifically of the Jewish left, whose hatred for Israel manifests itself in a general contempt for Jewish religion, culture and tradition.

Take the “Jewbags” case of Danielle Gilbert, a staffer for Democratic National Committee chairwoman Debbie Wasserman-Schultz who had been appointed the DNC’s Jewish outreach liaison. In a social media mishap, Gilbert posed along with her friends in a photo that she captioned “JEWBAGS” and that a friend of hers captioned as “Jew cash money team.” This is the sort of incident that the hip crowd that thinks “Heeb” is a great name for a magazine and “Jewcan Sam” is hilarious will laugh off. But it’s hardly the most offensive thing about Gilbert from a Jewish perspective. It’s just a symptom of the problem. Debbie Wasserman-Schultz has long been associated with J-Street, the anti-Israel group which has repeatedly worked to undermine Israel’s fight against terrorism. When a delegation from J-Street arrived at Schultz’s office last year, they were received by Danielle Gilbert who posed with them for a photo. That wasn’t the limit of Gilbert’s involvement with J-Street.

Danielle Gilbert’s twitter feed suggests that she attended the J-Street conference and she retweeted a call from the anti-Israel group to freeze “settlements.” Gilbert’s own anti-Israel background isn’t casual. She attended the London School of Economics and Political Science and while there was part of the Association for the Study of Ethnicity and Nationalism.

Gilbert had volunteered at Givat Haviva, a leftist group dedicated to pro-terrorist activism. Givat Haviva had a presence at the J-Street conference and has its roots in Kibbutz Artzi, which was far enough to the left that it identified closely with the Soviet Union and its leader eulogized Soviet mass murdering dictator, Joseph Stalin. The roots of Givat Haviva lie with Artzi’s Arab Department whose goal was a one-state solution.

Ilan Pappe founded and ran the Academic Institute for Peace in Givat Haviva. Pappe is a former member of Hadash, the Arab-Israeli Communist party, who supports the destruction of Israel via a One State Solution. An article on the Givat Haviva website features a photo of Danielle Gilbert with one of her friends, who writes about his own support for the One State Solution.

Through Givat Haviva, Gilbert conducted interviews with the residents of the Muslim Bartaa village which straddles the Green Line and has become a cause celebre for the anti-Israel left. Since then she has been a Jeremiah Fellow at Jews United for Justice, another left-wing group, which also participated in the J-Street conference, and whose board members intersect with a number of anti-Israel groups.

In 2008, Gilbert wrote, “We cannot see Mumbai’s events as anything less than the gruesome epitome of systematic terror. However, such a tragedy rightly makes us question our unequal treatment of minority cultures within larger communities,” shifting easily to calling the brutal murder of the Holtzberg family and countless Indians by Muslims a “tragedy” that serves to call attention to Muslim suffering.

For Jews there is far more to be offended by in that than in Gilbert’s use of a Jewish slur. There is also far more to be offended by in the fact that the DNC chose to elevate a woman aligned with J-Street and that she then elevated someone like Danielle Gilbert to conduct outreach to the people they no doubt fondly think of as the “Jewbags.”
If you want to understand why Obama thought he could treat Jews with such contempt, you have to remember that he thought Debbie Wasserman-Schultz was a normative figure and Schultz thought that Gilbert was a normative figure. In that echo chamber, a radical group like J-Street seems mainstream and Gilbert’s behavior seems equally mainstream.

Gilbert’s politics and contempt for the Jewish people make her completely unsuitable to act as any kind of liaison to the Jewish community. And yet Danielle Gilbert is not extraordinary. There are plenty of Jewish boys and girls in D.C. with the same privileged background, the same formal trips to Israel giving way uglier detours, foreign policy fellowships and eventually a place in a left-wing think tank or as congressional staffers. These are the people who show up to listen to J Street panels, break bread with members of the Muslim Brotherhood and denounce Israel. They are as banal as they are despicable.

The post-Jewish left mirrors the Post-American left in its radical and destructive identity. Its promotion of a counter-Jewish identity based on ridiculing Jewishness and hostility to Israel is once again splitting the Jewish community into two camps. By elevating Schultz, Gilbert and J-Street, the left is asserting its power to define a destructive form of Jewish identity. The backlash to them is a reminder that the left does not have the power that it thinks it does.

Jewish Anti-Semitism is a very real phenomenon, but it’s not self-hatred, no more so than Bill Ayers’ desire to destroy America is self-hatred. The essence of the left is the rejection of the past in a perpetual war for a better future. The very nature of Jewish identity is built on a continuity of tradition and the nature of the left is to fly its progressive colors by showing contempt for tradition. There can be no balance between the two because to choose the one is to reject the other.

The more the Democratic Party moves in tune with the left, the more it mirrors the bigotry of European leftist parties toward Jews and Israel. This is an inescapable process and the further left the party goes, the more anti-Semitic it will become.

To join the left is to fragment your existing identity, whether it is Jewish or Christian, American or Australian, and adopt a new form of identity. The further the extreme, the greater the fragmentation becomes. Push harder and you go from Debbie Wasserman-Schultz to Peter Beinart to Gilad Atzmon. It’s a slippery slope greased with lies and self-deceptions that ends at the bottom of a charnel pit, a gulag, a death camp or a terrorist training camp.
Posted by GS Don Morris, Ph.D./Chana Givon at 12:19 PM