The Beit HaMachpela Expulsion Orders: Hypocrisy at its worst 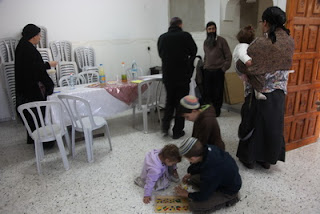 A little while ago leaders of Beit HaMachpela received notification from high official sources within the Civil Administration that, following extensive examination of the sales documents, it is clear that the purchase of Beit HaMachpela is 100% legal.
Inside Beit HaMachpela
Simultaneously, they received an eviction order from the Civil Administration, that being the extended arm of the Defense Minister in Hebron, ordering that the building be abandoned by three o’clock tomorrow afternoon. The only reason enumerated in the eviction order is that of ‘public order.’ Since moving into the building last Wednesday night, the area around the house has been calm and quiet, without any security issues whatsoever.

It is imperative to understand the workings of Israeli decision-makers and the wheels of justice. Two short episodes will make this crystal clear:

First, an example from Beit HaShalom, a huge building purchased for over a million dollars. Jewish families were forcibly expelled from this site after living there for almost two years, by Ehud Barak.
Minister Yuli Edelstein meeting with building residents
That case is presently in court, where recently testimony was given by those involved, including the original owner, Fais Rajabi. During questioning, Rajabi was asked if he had sold the building, to which he replied, ‘yes.’ He was then asked if he’d received money for the building, to which he also replied yes. Then he added, ‘but I changed my mind and gave the money back.’

The judge then asked Rajabi if he had any receipt or proof of his returning the money. Rajabi replied, ‘no,’ to which the judge then asked, ‘you returned such a large amount of money without receiving a receipt?’ Rajabi replied, ‘We, Arabs, everything we do is based on faith.’ At that point, everyone in the courtroom started rolling on the floor, laughing, including the public officials there.

If it wasn’t so sad, it really would be funny. Because Rajabi’s claim, without any documentation or witnesses, seemingly brought about the Jews’ expulsion from the building, and is costing us hundreds of thousands of dollars in legal fees. Not to mention the fact that our building is left empty, desolate, for years.

The view from the roof of Beit HaMachpela is amazing. It overlooks Ma'rat HaMachpela, the tomb of the Forefathers. The question seems clear: does this belong to the Jewish people? Is Machpela part of our national heritage? Can we continue to reside in the city of Abraham and Sarah?

Ehud Barak’s obvious ideology exudes a raucous, reeking odor, opposing a Jewish presence, a Jewish community, in the city of the Patriarchs and Matriarchs. His actions, ordering expulsion from Beit HaShalom in December, 2008, and the present expulsion orders, are expressions of his personal beliefs, which do not, in any way, shape or form, represent the will of the Israeli public, or of this government. He doesn’t want Jews in Hebron. Period.

The question is now: what’s with Bibi and his cabinet. Do they have a differing opinion? Do they want Jews in Hebron? A minister and MK have already visited the house. Others have offered support. That is not enough.
MK Otniel Shneller hanging a Mezuzah in Beit HaMachpela
Prime Minister Binyamin Netanyahu owes Hebron. His government, in January, 1997, passed and executed the Hebron Accords, which divided the city, leaving most of Hebron, and the hills surrounding the Jewish community, in the hands of Arafat. This, leading to shooting attacks against the community for two and a half years, from those hills. Leading to the murder of 10 month old Shalhevet Pass, eleven years ago.

The government decision of January 1997 specifically calls for the continued development of Jewish Hebron. Why is Bibi’s government doing the opposite, stunting the community’s growth?

A government decision from the Begin era, in 1980, states that, concerning Hebron, decisions will be made by the entire cabinet and not by one minister alone. Why did Bibi allow Barak to issue the expulsion orders prior to a discussion in the cabinet, a discussion which is scheduled for tomorrow?

The Israeli left, led by such people as Barak, love to live with contradictions. They oppose communities such as Migron and others, saying, ‘why live on ‘palestinian land’ when there are so many other places where you can live?!’ Yet when Jews purchase property in Hebron, they declare that this disturbs ‘the public order.’
It should be noted that buying from an Arab in Hebron is not a simple task. This purchase was accomplished over a period of years, at great expense. And of course, the Arab seller has committed, according to ‘palestinian authority’ law, a capital crime for which the punishment is death.

Israeli ministers who support Hebron, who support continued Jewish presence in Hebron, as well as growth and development of this holy city, must do more that talk. Moral support, at this point in time, is worthless. They must present Netanyahu with an ultimatum that leaves no room for doubt. That must be a demand that the Prime Minister intervene, void the expulsion order, and officially recognize the legality and legitimacy of Beit HaMachpela. That’s why this government was elected. Not to support the extreme left. Rather to provide continued sustenance to places such as Hebron.
MK Otneil Shneller on the roof of Beit HaMachpela

Otherwise we are witness to hypocrisy at its worst.
Posted by GS Don Morris, Ph.D./Chana Givon at 4:10 AM