What took so long with flotilla film? 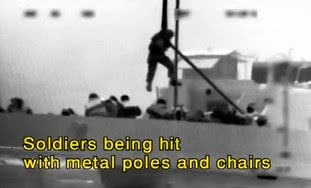 A disagreement between the IDF and the Foreign Ministry over the effect the release of video footage from the navy’s anti-flotilla operation on Monday would have on the military’s prestige held up the distribution of the footage to the media by several hours, defense and diplomatic officials said on Tuesday. The footage was released on Monday afternoon but only at around 4 p.m., close to nine hours after the takeover of the Mavi Marmara, the Turkish passenger ship where the clashes took place and nine activists were killed. The takeover of the ship – which began at 4 a.m. – was completed by around 7.

Although it takes time to process and edit such footage, it would have been possible to release it earlier in the day, government officials said.

According to one government official, the footage was already available at the IDF’s underground central command-and-control center – called the Bor (the Pit) – located in the Kirya military headquarters in Tel Aviv.

“The Foreign Ministry pushed for the footage to be released as soon as it came in,” said one official who participated in the discussions. “The IDF hesitated due to footage which was not complimentary for the naval commandos.”

The videos show commandos from Flotilla 13 – known as the Shayetet – rappelling down ropes from Israel Air Force Black Hawk helicopters onto the upper deck of the ship, which was carrying about 700 passengers.

Each commando was immediately attacked by a number of activists armed with bats, knives and metal pipes. In some of the footage, which was recorded by thermal cameras placed on aircraft hovering above the ship as well as on nearby navy ships, activists are seen hitting soldiers with bats and then throwing some of then down to lower decks or into the water.

Defense officials confirmed that there was some hesitation to release the video since it could undermine the elite naval commando unit’s morale.

Kadima MK Nachman Shai, a former IDF Spokesman who has a doctorate in public diplomacy, said that had the footage come out earlier in the day it would have dramatically changed the way the story was covered by the international press.

“I watched the videos and it filled me with anger, since it was not flattering for the Shayetet,” he said on Tuesday. “But at the same time, in these types of events the first hours set the rest of the media coverage, and if the statement and video had come out earlier it could have gotten the message across that these soldiers were violently attacked.”
Posted by GS Don Morris, Ph.D./Chana Givon at 9:41 AM