'Guns may have been thrown overboard' 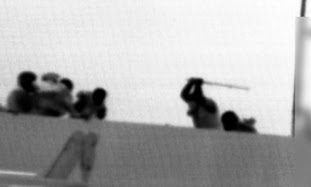 Firearms may have been thrown overboard by passengers of the Mavi Marmara, Israel Radio reported Friday, citing IDF sources. According to the report, gun-sights and rifle cartridges not fitting IDF weapons were discovered upon inspection of the ship, leading defense officials to believe that there may have been weapons on board when the ship set out from Turkey aside from the knifes, rocks and slingshots found in the search.

Coded messages apparently alluding to scenarios of soldier-kidnapping and soldier fatalities were also found on board the ship.

Some of those aboard the ship recorded messages saying they intended to become shahids , martyrs for the cause of war against infidels.

A Reuters report appeared to corroborate on Friday claims of an attempt to kidnap a soldier during the raid of the ship.

Andre Abu Khalil, a Lebanese cameraman for Al-Jazeera TV who was aboard the Mavi Marmara, told Reuters that some 20 Turkish men had tried to prevent the boarding commandos from reaching the wheelhouse and commandeering the ship.

Using slingshots, metal pipes and bats they initially succeeded in wounding and overpowering four Israeli soldiers and dragging them below the deck.

A makeshift hostage negotiation took place aboard the ship, according to the cameraman. One activist used a megaphone to tell the commandos the four captive soldiers were well and would be released if they provided medical help for the wounded passengers. An Israeli Arab MK - presumably Haneen Zuabi - was said to have mediated in the negotiations, and the soldiers acquiesced. The wounded were subsequently brought up to the top deck to be airlifted off the ship.
Posted by GS Don Morris, Ph.D./Chana Givon at 12:37 AM