Terrorists at the helm 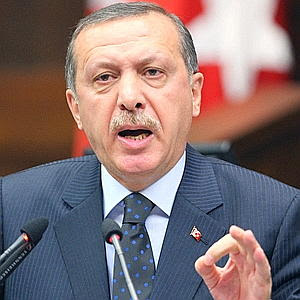 Certainly he knows that the convoy was organized and manned by the Foundation for Human Rights & Humanitarian Relief -- as bloody-handed a terrorist gang as exists in the Mideast.

Known by its Turkish acronym, IHH, the group has strong and enduring ties to Hamas and al Qaeda. Indeed, the Turkish government itself raided IHH's Istanbul office in 1997, uncovering guns, explosives, bomb-making manuals and jihadist flags -- along with documents showing that its members had been dispatched to war zones like Afghanistan, Bosnia and Chechnya.
Tayyip Erdogan
AP
Tayyip Erdogan

And a 2006 report by the Danish Institute for International Studies linked IHH to a foiled al Qaeda bombing plot against Los Angeles International Airport.

No surprise, then, that the one vessel whose passengers violently resisted boarding by Israeli commandos seems to have been the IHH flagship -- and that most, if not all, of those who died in the ensuing struggle were IHH members.

Nor that IHH leaders stated openly that the flotilla's real purpose was to provoke a confrontation with Israel that would further damage Jerusalem's already frayed diplomatic and military ties with Turkey -- not that Ankara needs much encouragement in that regard.

All of which makes Prime Minister Erdogan a flaming hypocrite.

But wait -- there's more. There is no "humanitarian crisis" in Gaza in the first place: This year alone, more than a quarter-million tons of medicine, food and other supplies have already moved from Israel to Gaza.

More to the point, Israel offered to send the flotilla's supplies to Gaza once they'd been inspected for weapons and other contraband.

The offer was flatly rejected.

As was a similar offer from Egypt, which also maintains a Gaza blockade -- for essentially the same reason: The Islamist lunatics who make up Hamas also pose a mortal threat to Cairo.

All this adds up to sufficient justification for Israel to have intercepted the flotilla.

The fact is, the convoy's purpose was to break a blockade of Hamas-run Gaza that is fully supported under international law -- even if Israel chose to act in international waters. And, as a government spokesman said, given Hamas' constant effort to import weapons into Gaza, "If this blockade is broken, every man, woman and child in Israel will pay a price."

Not that the crisis has passed.

The media is in full-throated condemnation mode, as is the "international community." No surprise there -- that's what they do best.

Then there was news yesterday of two new "aid" ships under way in the Mediterranean, bound for Gaza.

Has a seaborne intifada now begun?

If so, its purpose is not peace, but rather the destruction of Israel and the eviction of democracy and human rights from the Middle East.